Many fans think John Mayer’s “Paper Doll” is about Taylor Swift, but he’s not talking. 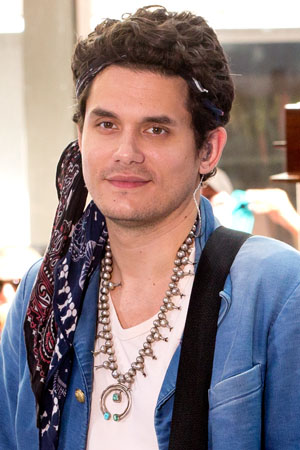 John Mayer might not be afraid of being photographed with his on-again girlfriend, Katy Perry, but don’t bother asking him to talk about the meaning of his songs.

The 35-year-old singer gave a cop-out response when NBC’s Today co-host Willie Geist asked him about the speculation that his new single, “Paper Doll,” is about his ex-flame, Taylor Swift.

“There’s been some speculation from the press that it might be about someone,” Geist asked, not referring to Swift by name.

Mayer then gave a weird non-answer.

“Yeah, songwriters write songs because of people, about people,” Mayer said of the song. “Anything someone else wrote is their reception of a song. I don’t get involved with [it]. It’s none of my business.”

It doesn’t matter if the dark-haired singer admits it: We totally know the song is about Swift, thanks to lyrics like “You’re like 22 girls in one/ And none of them know what they’re running from/ Was it just too far to fall for a little paper doll?”

It’s basically a line-by-line response to Swift’s 2010 song “Dear John,” an ode that she penned about her short-lived relationship with Mayer.

“I’ll look back and regret how I ignored when they said run as fast as you can,” she wrote.

Mayer later blasted the song in a whiny interview with Rolling Stone in 2012.

“As a songwriter… I think it’s kind of cheap songwriting,” he told the magazine. “I know she’s the biggest thing in the world, and I’m not trying to sink anybody’s ship, but I think it’s abusing your talent to rub your hands together and go, ‘Wait till he gets a load of this!’ That’s bulls**t.”

“It made me feel terrible,” he continued. “It was a really lousy thing to do.”

Is “Paper Doll” about Taylor Swift or someone else?