Katy Perry posts a photo of her and ex-boyfriend John Mayer getting cuddly on the Fourth of July.

Katy Perry and John Mayer might be exes, but some of their recent behavior seems to suggest 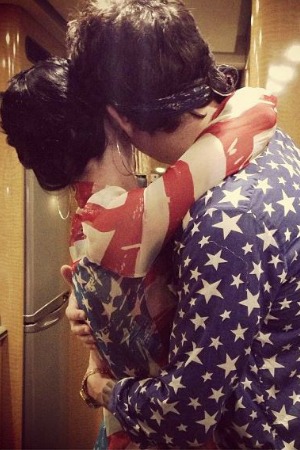 otherwise. Last week they were seen holding hands at a hotel in New York, and now she’s posting photos of them getting even cuddlier.

Just Jared reports that the on-again-off-again couple were in Philadelphia to take part in the Philly 4th of July Jam concert. The concert was part of the Welcome America Festival in Philadelphia.

Battle of the exes: Taylor Swift vs. Katy Perry >>

Perry and Mayer apparently hung out backstage, and Perry even posted a photo on her Instagram account that showed the two of them hugging. The caption read: “Whose broad stripes and bright stars?!”

For two people who are supposed to be “exes,” Perry and Mayer sure seem to be hanging out a lot. Not only are they hanging out — they’re also doing a lot of touching. Between all the handholding and hugging, it certainly looks like they could be back together again. After all, how many exes get together so often and are so handsy with each other?

If Perry and Mayer are back together again, here’s hoping that he treats her like a lady and doesn’t end up dumping her with a text like her ex-husband, Russell Brand, did. Mayer doesn’t seem like the guy who would do that sort of thing, but you never know.

Katy Perry is tired of wearing so much makeup >>

Some could argue that Perry and Mayer just happen to be the kind of exes that turn into great friends and that all of their recent behavior means nothing more than the two getting closer as buddies. Either way, let’s just hope that they’re both happy.

What did you think of Perry’s photo? Do you believe they are just friends or back together?