Seth Meyers is moving on from Saturday Night Live and it looks like he is going to do so as a married man. Meyers and his girlfriend, Alexi Ashe, are engaged! 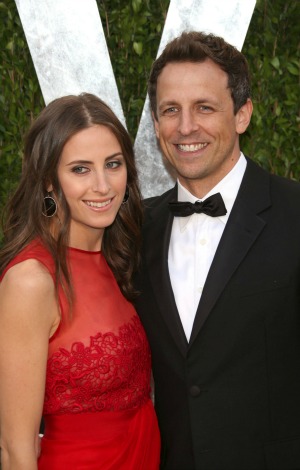 Seth Meyers is moving onward and upward (and maybe growing up a little). The Saturday Night Live cast member and writer found out he would be taking over Late Night from Jimmy Fallon, and now it looks like he will not be doing it as a single man.

“He’s very excited for the next phase of his life,” a source told Us Weekly about the engagement. “He’s known that she’s The One for awhile, but it was all about timing.”

Lorne Michaels might soon have a monopoly on NBC late night >>

The comedian has been dating the human rights lawyer for years, and the two live together in New York. Meyers spoke with Elle last year about when he thought the couple might take the leap into marriage.

But now that the season of SNL is over, he is looking forward to that future, and it seemed like the right time.

“With Late Night, his schedule will be slowly easing up,” a source told Us Weekly. “He wanted to do it after SNL wrapped [because] he didn’t want to be an absentee fiance. Her family loves him.”

With his new job, the funnyman may seem like the perfect guy for a lot of women. But Meyers just seems happy he has found a woman who sees his skills for what they are.

“Once you get past funny, my other qualities are so below average,” he told Elle. “It’s not like I’m handy. My girlfriend’s cousin is married to a contractor. He’ll show up at the house with a tool belt and a drill, and he’ll go around fixing everything — while I’m playing video games. Basically, if you’re not laughing at me, you’re definitely out there looking for better options.”

Meyers is expected to stay with SNL through the fall season and will transition into his new role when Fallon takes over The Tonight Show after the 2014 Olympics.