Adam Sandler and his man-child friends are back again — for better or worse. This time, they’re in his hometown, trying to keep up with the youngsters in a movie that’s more of a 1980s throwback than a contemporary comedy. 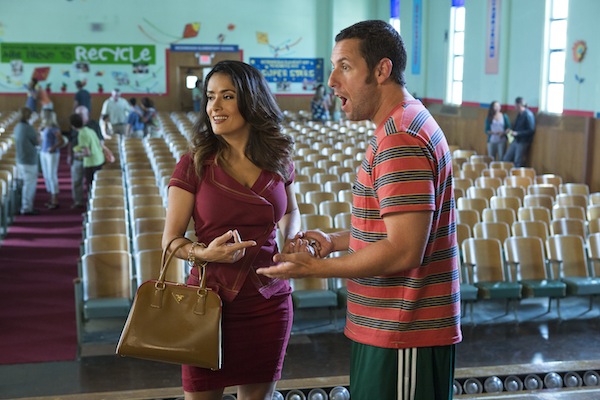 2 Stars: Perfect for those who remember the 1980s

Lenny (Adam Sandler) has relocated his wife Roxanne (Salma Hayek) and their kids to his small hometown on the East Coast. It’s the last day of school and Lenny, Kurt (Chris Rock), Eric (Kevin James) and Marcus (David Spade), decide to embark on a small adventure.

Marcus, however, gets the shock of his life when the son he didn’t know he had arrives by train. Teenage Braden (The Hunger Games‘ Alexander Ludwig) is one huge, angry dude making Marcus look like his mini-me. With scary doodle-style tattoos up and down his body, Braden seems more likely to kill a hamster than connect with his father. But miracles are known to happen in the movies.

Battle of the flicks: Pacific Rim vs. Grown Ups 2 >> 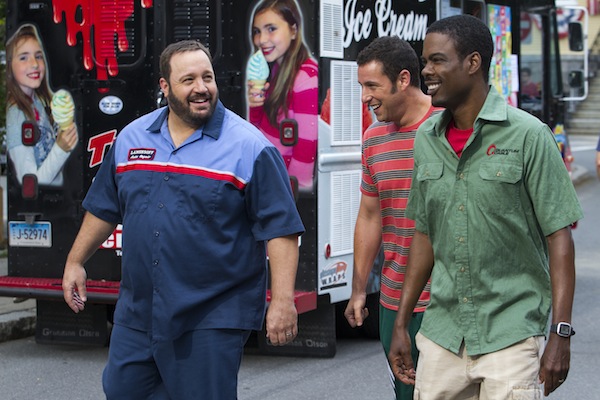 Meanwhile, Kurt has gone back to work as a slacker cable repairman while his wife, Deanne (Maya Rudolph), finds her anniversary gift inside her baby’s diaper.

There are many fun cameos in the film, and one of the best is Officer Fluzoo, played by Shaquille O’Neal. O’Neal’s ability to play physical comedy while making fun of his less-than-stellar free throw record, is pretty cute. 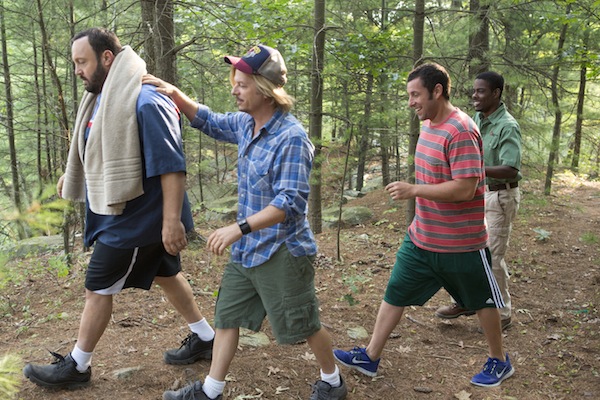 Taylor Lautner plays a troublemaking frat boy who forces Lenny and the boys to jump naked off a rock at the local swimming hole.

Steve Buscemi plays Wiley, an uptight driving instructor who dresses up as a mean Flavor Flav when Lenny throws an ’80s-themed party.

Grown Ups 2 is at its best during the ’80s party. If you remember the 1980s, you’ll have a ball checking out the hilarious costumes. Chris Rock makes a perfect Prince, while Kevin James kills it as Meat Loaf. Boy George and the Terminator make appearances, too.

Bottom line: The two 60-year-old men sitting next to me in the theater practically laughed their junk off. The rest of the audience, not so much.