Next month, Ashton Kutcher will strut his stuff as Apple co-founder Steve Jobs. In the new drama, aptly titled Jobs, Kutcher gives his all as the icon. 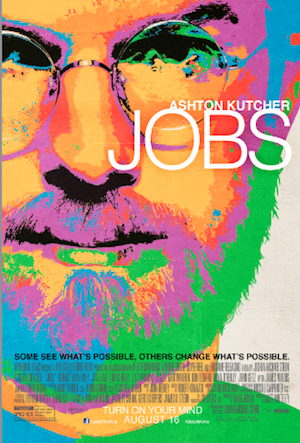 “Some see what’s possible, others change what’s possible.” That’s the tagline for Open Road Film’s biopic, Jobs. It stars Ashton Kutcher as the late entrepreneur, inventor and overall genius Steve Jobs. The film hits theaters this summer and the studio has released a new promotional poster.

The film was written by Matt Whiteley and covers 40 years (1971–2011) of Jobs’ life. Viewers will watch as he goes from college dropout to one of the world’s biggest innovators. Alongside him is Steve Wozniak who helped co-found Apple Inc. The company was formed in 1976 as Apple Computer Inc., which went on to become one of the world’s largest tech empires.

Unfortunately, that kind of success doesn’t come without a price. Jobs shows the good and bad of Apple’s rise. Jobs himself had a tumultuous relationship with the venture. At one point, he was kicked out of the company. Yes, he was fired from something he helped build. But in the end, Jobs would have the last laugh because his legacy is unparalleled.

Jobs is directed by Joshua Michael Stern and co-stars Josh Gad, Dermot Mulroney, Lukas Haas, J.K. Simmons, Matthew Modine and James Woods. Earlier this year it was chosen to close the Sundance Film Festival and now the rest of the world can finally see it. Jobs opens in theaters Aug. 16.

What do you think of the new poster for Jobs? Will you be seeing the movie?