Both Kim Kardashian and Kanye West are enjoying every moment of being parents, but West is reportedly not participating in one very important task: changing his baby’s diaper. 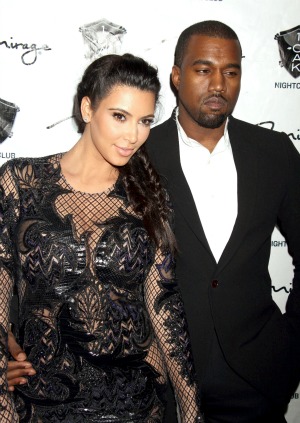 By all accounts, Kanye West is enjoying fatherhood. The 36-year-old appears to be embracing all areas of his new position, except one: He is apparently not too excited about the messy side that comes along with being a father.

“He’s not changing diapers,” a source told Us Weekly.

However, that doesn’t mean the rapper isn’t excited about his new daughter, North, and it sounds like he can’t get enough of her.

“He doesn’t leave North for more than an hour,” another source told the magazine. “Kanye holds the baby all the time.”

“Kim is breast-feeding constantly,” a friend said. “She’s loving it.”

Will we ever get to meet baby North? >>

And another famous friend is proud of Kardashian’s talent as a first-time mom.

“When I walked in to see her, Kim was holding the baby,” remembers Pussycat Dolls founder Robin Antin. “I said, ‘Oh, my God. You’re a natural.’ Kim said, ‘I know — it’s so weird!'”

Besides not wanting to change diapers, both new parents seem to be taking their new positions seriously, and are spending every moment they can with baby North. Kardashian has only been seen out a few times since giving birth five weeks early in June.

The couple has vowed to keep their daughter out of the spotlight and have started early with keeping that vow. Kimye were reportedly offered $3 million for the first photos of their new baby, but turned down the offer. There had also been rumors the baby would first appear on Kardashian’s mom Kris Jenner’s new talk show, but sources said that also wasn’t a possibility.

“I just don’t want to talk to America about my family,” West told the New York Times in June. “Like, this is my baby. This isn’t America’s baby.”

For two stars who have made their living in the spotlight, the vow is an important one. But for now, it sounds like they are just enjoying every moment as new parents.