His Royal Highness dropped by the set of Doctor Who yesterday and it looks like he was royally geeked out over all the awesome things the crew let him do. 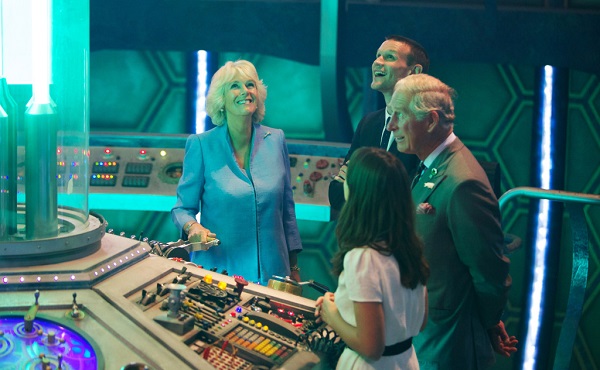 Prince Charles was like a kid in a candy story yesterday when he was “allowed” on-set at Doctor Who. The Prince’s visit came during Doctor Who‘s 50th anniversary celebration and Charles admitted to everyone that he’s been a fan of the show since the very beginning. He even impressed current Doctor, Matt Smith, with how much he knew of the show.

Dreamcasting: Our picks for a lady Doctor >>

“The Prince of Wales said he remembers watching the show when he was 15 and seemed very knowledgeable on the Who history, so it’s nice to think they are watching,” Smith commented.

Doctor Who made its television premiere in 1963, just nine days before the Prince’s 15th birthday. And, from the sound of it, the Prince really has watched the show since its premiere. With all his knowledge, could the soon-to-be grandfather ever have a part on the show?

Well, he certainly knew how to handle being a Dalek. One of the crew members handed over the microphone that is controlled by a special voice-warping system and let the Prince have a go at his best Dalek impersonation. Among snickers, Charles let loose with the classic, “Exterminate!” and, after a bit of egging on from an adviser, “You are our prisoners!”

Controlling one of the Doctor’s most evil foes wasn’t all that the royal was able to do. He also met The Silence and some Cybermen. Plus, he and Camilla were able to take a tour of the TARDIS’ center console. When Camilla pushed the right lever, the TARDIS came roaring to life, much to the surprise of everyone. Their Royal Highnesses certainly seemed to enjoy their tour as they were guided around by Matt Smith and Jenna-Louise Coleman.

The entire trip seemed quite adorable. Between his Doctor Who obsession and his farming abilities, it’s hard not to find the Prince rather charming.

Sign up for our newsletter! The Daleks command it. >>

As for Doctor Who, the show will return later this year with a very special 50th Anniversary episode. Not only will we witness John Hurt taking on the role as a former Doctor, but fans will also say goodbye to Smith, who has decided it’s time for him to move on from the role. We’re sad to see him go, but can’t wait to see who the Doctor will regenerate into next. Maybe it will be Prince Charles?!