For the 7th consecutive year, Joey (“Jaws”) Chestnut wins the famous Nathan’s Hot Dog Eating Competition and breaks his own record in the process. 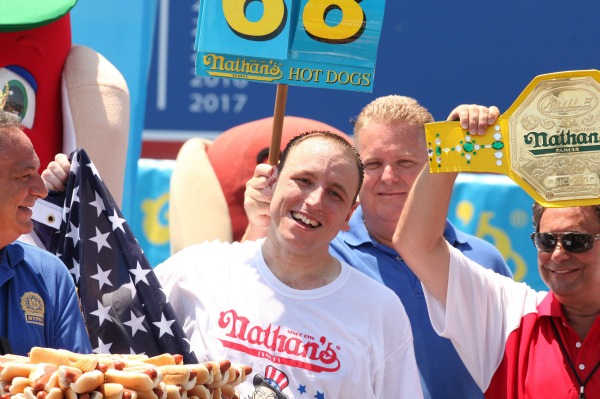 There’s nothing quite like the smell of hot dogs grilling on the barbeque, especially on the Fourth of July. But there’s one guy out there who probably doesn’t want to see or smell a hot dog for a good long while — and that’s Joey Chestnut.

Fourth of July drinks for your holiday BBQ >>

For the 7th straight year in a row, Chestnut (aka “Jaws”) has been crowned as the hot dog eating champion at the famous Nathan’s Hot Dog Eating Competition. The contest, which is held every year on Coney Island, challenges people to eat as many hot dogs as they can in 10 minutes. Chestnut beat his 2012 record of 62 dogs by eating a whopping 69 dogs this year. His previous personal best was 68 dogs.

In addition to what is sure to be quite a case of indigestion, Chestnut took home the $10,000 grand prize, along with a mustard-yellow championship belt (that will probably need to be let out a few notches today). With his reputation preceding him, Chestnut was treated like royalty before the competition began as he was carried in on a mustard-colored, Roman-style bier by pallbearers.

Fourth of July desserts in red, white and blue >>

With this 7th victory, Chestnut has now won one more than Takeru “The Tsunami” Kobayashi. Chestnut obliterated Kobayashi’s previous reign as hot dog king in 2007, when he ate 67 dogs in12 minutes (before the contest’s time was shortened to 10 minutes).

This year, the competition wasn’t even close. The 2nd place winner, Matt Stonie, only ate 51 dogs. As for the women’s side of the competition, Sonya “Black Widow” Thomas took 1st place by eating 37 dogs.

The NY Daily News reports that Chestnut said he has no intention of retiring any time soon. Earlier this week the champ said, “Seven is not the end. Ten is looking more and more likely.”

Vodka cocktails for the Fourth of July >>