The Lone Ranger’s filled with action, humor and compelling characters. Here are two featurettes that explore the film’s timeless story. 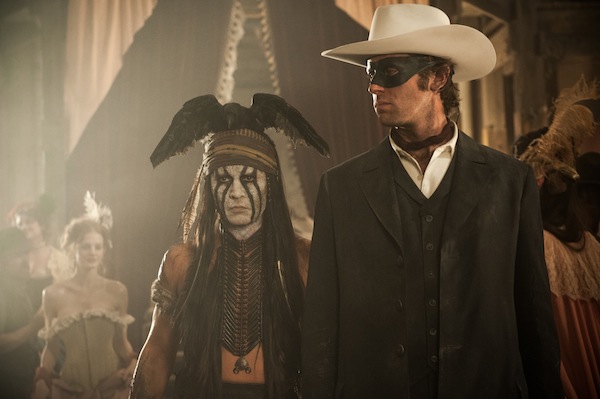 Law and order has come to the West in Disney’s The Lone Ranger, this holiday weekend’s embark on the classic journey of good versus evil with Armie Hammer and Johnny Depp. The actors play the iconic characters of John Reid/The Lone Ranger and Tonto.

Disney’s released two new featurettes that highlight the film’s characters and action. The first one explains the who’s who of the cast and what they bring to the table. Hammer reveals, “I love playing the Lone Ranger. It’s like every kid’s dream.”

The new Lone Ranger: Who is Armie Hammer? >>

Meanwhile, Depp’s Tonto is nothing we’ve ever seen before. When he initially did the makeup tests for the character producer, Jerry Bruckheimer could barely recognize him. That’s how much he submerged himself into the role.

The film’s villain is a straggly fellow called Butch Cavendish (played by William Fichtner). Fichtner describes the character as the last person you’d want to find in a dark alley. There’s also the addition of Helena Bonham Carter who jokingly refers to her character, Red Harrington, as a “peg-legged Southern madam.”

The second featurette centers on the magic behind trains. You can’t have a movie about the Old West without them. The film’s set against the backdrop of a continental railroad. The producers built a train track from scratch where everything was historically accurate. The trains were 2012 models infused with 1860s technology.

www.youtube.com/embed/lQF0JaAqbGc
The Lone Ranger is playing in theaters now.