There is always controversy when a book gets made into a movie or a television show. TV and movie watchers appreciate seeing the action come to life, while die-hard bookworms prefer the pages. Whether you watch or read, these shows and movies are totally worth it.

This vampire series, airing on HBO, is based on the series of Sookie Stackhouse novels — The Southern Vampire Mysteries — written by Charlaine Harris. Anna Paquin stars as Sookie and Stephen Moyer plays Bill Compton in this compelling blood-sucking drama that first aired in 2008. 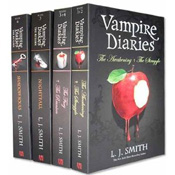 Another popular vampire television show, The Vampire Diaries, is based on author L.J. Smith’s popular series of novels of the same name. The show first aired in 2009, capturing audiences and jumping on the wave of the blood-sucking craze.

Despite the fact that he’s a serial killer, it’s impossible to hate lead character Dexter Morgan, who’s played by Michael C. Hall in the Showtime series Dexter. Based on the Dexter novel series by Jeff Lindsay, the show follows the life of seemingly nice and normal Dexter, who has one bad habit: He kills people. It’s not all bad — Dexter only kills the ones who truly deserve it.

This super-popular television series, which ran for 11 years from 1972 to 1983, was based on the book of the same name written by H. Richard Hornberger and W.C. Heinz under the pen name Richard Hooker. The original story followed three army doctors and was inspired by Hornberger’s experiences as a military surgeon.

Stephen King never fails to attract an audience, whether it be the kind who like to read or the kind who like to watch. His latest book-turned-television series, Under the Dome, follows the people of the small town Chester’s Mill — who are suddenly trapped under a seemingly impenetrable dome. The show premiered this summer on CBS. Though only a few episodes have aired, King already has people forming sides as to whether the book or the show is better.

What woman doesn’t love the foursome of Carrie Bradshaw, Charlotte York, Miranda Hobbes and sultry Samantha Jones — and their escapades of love, sex and true friendship. The beloved series, based on Candace Bushnell’s novels, originally aired on HBO in June of 1998 — capturing adult audiences everywhere and keeping them engaged until the show’s end in 2004.

Friday Night Lights: A Town, a Team, and a Dream started as a nonfiction book by H. G. Bissinger, was made into a movie in 2004 and was developed into a television series by Peter Berg in 2006. The series captures the life of a small-town high school football team, along with their friends and family.

True Blood recap: “Who Are You, Really?”
Top 10 reasons why we’ll miss Dexter
Under the Dome: Love it or leave it?