Rough waters ahead for Deacon and Rayna, plus two new characters will arrive to stir up even more trouble. 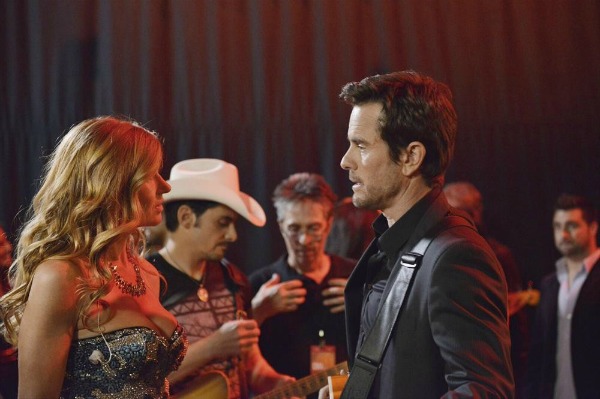 ABC’s Nashville is still off for what feels like an extremely long summer hiatus (no, it’s not really any longer than other shows, it just feels that way right about now), but there is one thing fans have to keep them happy during these warm months — spoilers.

TV Guide reports on some Deacon (Charles Esten) and Rayna (Connie Britton) news from series creator Callie Khouri. It’s not a spoiler to reveal that the two will indeed survive the car crash from the season finale, but things won’t get any easier for them once the physical injuries have healed.

“They are never going to have [a] smooth-sailing relationship,” Khouri said about the couple.

As for Deacon’s discovery that he was Maddie’s dad, don’t expect him to instantly become Father of the Year. “[Season 2] is not going to look like Father Knows Best. I don’t think Deacon ever thought of himself as father material. We’ll see him grapple with [whether] or not he’s right.” Khouri revealed.

Talking more about the differences fans can expect between the first and second season, showrunner Dee Johnson told The Hollywood Reporter, “Season one was a hurtling train ride. We’re going into Season two knowing what the beat is and can calibrate and manage it better.”

There’s also news from TVLine about two new characters heading onto the show next season. The first is named Zoey, and she was Scarlett’s best friend when they were growing up. She’s come to Nashville looking to make it as a singer. Zoey will be stepping right into her old friend’s shoes when she takes over Scarlett’s waitressing job at The Bluebird.

The second character is named Layla. She’s the winner of an American Idol-type music competition and she wants to be a country star so bad that she’s willing to do just about anything to look the part, including downplaying her higher education, stable family life and Northeastern roots.

Which storyline are you most excited to see next season?