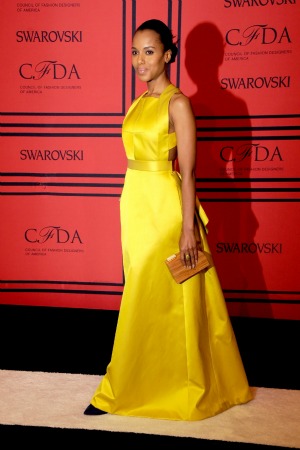 Someone is very good at keeping secrets. That someone is Scandal star Kerry Washington who married San Francisco 49ers player Nnamdi Asomugha on June 24. According to E! News, the wedding took place in Blaine County, Idaho.

The couple have been dating since last summer and the two have had quite a busy year. Washington not only stars in the ABC hit drama, but she played Jamie Foxx’s wife in the Oscar-nominated film Django Unchained. The 31-year-old NFL cornerback signed with the Northern California team in April after two seasons with the Philadelphia Eagles.

This is the first marriage for the 36-year-old actress although she was previously engaged to actor David Moscow. Their engagement ended in 2007.

Asomugha is well-known for his philanthropic work off the field. He runs the Asomugha Foundation which funds the Orphans and Widows In Need program and the Asomugha College Tour for Scholars. He was honored with The President’s Volunteer Service Award in 2008.

In his spare time, he has also picked up an acting role or two with spots on Friday Night Lights, Leverage and The Game.

The duo have been pretty quiet about their relationship and clearly they are even more mum when it comes to their marriage. There’s been no confirmation from either of the stars’ reps, but Washington has kept it business as usual on her Twitter account by talking about the U.K. Season 2 debut of Scandal.