A happy story about a comedian’s lost wallet and the kind stranger who returned it. 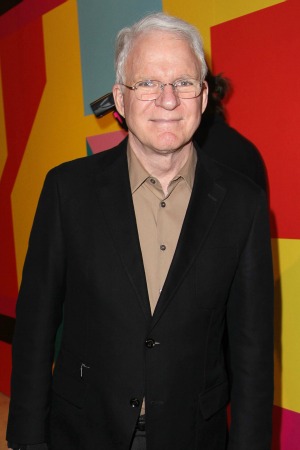 celebrities, a story like this one comes along to make your day a little happier.

Related story Rihanna 'wanted to kill everybody' when she watched Home

The Times Leader reports that Steve Martin has a good samaritan to thank for the return of his wallet. The comedian reportedly lost the very important item while he was out bicycling before his performance on Tuesday night.

5 movies to restore the feel-goods this weekend >>

But before Martin had to start making calls to cancel his cards and get a new driver’s license, the wallet was returned. A man working on Pennsylvania Street found the wallet and, knowing that Martin’s bluegrass show was in town, reached out to contact the concert hall to tell them he’d found it.

Not realizing that Martin’s wallet was missing, Will Beekman, programming director at the concert hall, admitted he didn’t believe what he was hearing.

“We thought it was a joke at first,” Beekman said about his initial reaction to the call.

After a quick check with Martin’s tour manager, it was confirmed that the comedian was indeed missing his wallet and arrangements were made for its safe return.

Oddly enough, no one seemed to get the stranger’s name, though one witness reported talking to him after the incident. Ellen Masaitis, who works at Curry Donuts next to the theater, said that the man said Martin gave him a $100 reward.

“He was just a guy that was walking past Boscov’s, and found Steve’s wallet outside of Boscov’s,” Masaitis said.

Meanwhile, Kirby box office manager, Tina Yurko, reported that she briefly saw Martin while he was waiting for his good samaritan to arrive.

“Steve Martin came out beforehand. He was very anxious for the gentleman to return the wallet, and he wanted to see the gentleman so he could thank him in person,” Yurko said.

When the man arrived, staff ushered he and Martin into another room for some privacy. Yurko reported that Martin offered the stranger tickets to a performance, but apparently the man’s wife wasn’t feeling well and he was not able to attend.

After the incident, Martin sent out a tweet in praise of the kind man, saying: “An honest man is found in Wilkes-Barre! Thank you, sir!”

This wasn’t the only good news that Martin got recently, he also became a dad late last year.

Fabulous at any age: Elle Macpherson poses topless at 49
An Italian villa & $70 million: James Gandolfini’s will revealed
Miley Cyrus thinks she was Lil’ Kim in her past life