First she bared her soul on TLC’s Breaking Amish and now she’s baring a lot more than that for a Maxim photo shoot.

When Breaking Amish star Kate Stoltzfus admitted that her secret wish was to be a model, chances are 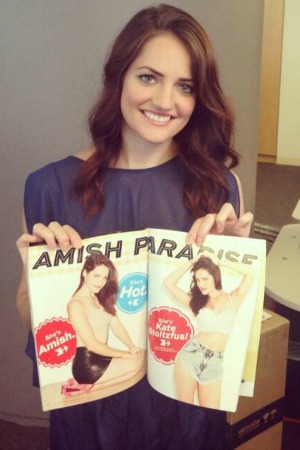 she didn’t expect it to happen quite so fast. On the show, Stoltzfus showed fans that she was ready to bust out of her Amish upbringing when the cameras followed her to a modeling agency for the very first time.

“Before I had even signed a contract with a modeling agency, I did a test shoot to see if I could photograph well, and the first outfit they put me in was a bathing suit!” Stoltzfus told Maxim. “I have to admit it was a little intimidating, but now I enjoy doing it.”

Enjoy it she must, because now she’s getting the chance to pose for one of the biggest magazines around — Maxim. In the new shoot, Stoltzfus isn’t in a bathing suit, but she does bare quite a bit of her body in some pretty revealing outfits. Some of the looks included cutoff denim shorts paired with a bustier, black leather shorts with a pink tank and very high cutoff shorts with a small white bustier that showed off her toned tummy.

Stoltzfus credits her Amish upbringing for helping her get into such great shape.

“There are definitely a lot of Amish women who have great bodies, because they work hard. They also eat really healthy, since they grow their own food,” she said. “That’s one big thing I miss about home, being able to garden and take care of plants.”

On the latest season of the TLC show, Stoltzfus and the other former Amish have been seen living together in Florida. Just last year, some were questioning whether or not the show was real, but either way it is definitely a hit for the network. Starting in July, a new group of Amish young people will be discovering the big city, this time in Los Angeles.