Kate Middleton — like all new moms — is getting nervous about the birth of the royal baby! 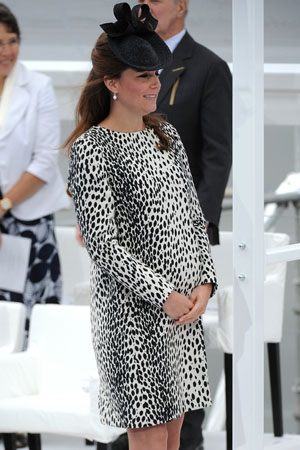 It’s only a few more days before Kate Middleton is reportedly due to give birth to her first child — and reality is definitely setting in! The Duchess of Cambridge is “full of energy and really rather used to the bump!” a source told US Weekly.

The popular royal is known for being cool and calm under pressure, but the pre-baby “what ifs” are starting to get to her.

“Naturally she is a little nervous about the big day, what new mum wouldn’t be?” the source continued.

Well, yeah — but few other moms have the whole world anticipating her child’s birth. Photographers are already camped outside of St. Mary’s Hospital in London to get the first glimpse of the royal couple entering the hospital. Middleton is taking steps to ensure a calm birthing experience, though: She’s reportedly on board with hypnobirthing, a technique designed to reduce pain and tension during childbirth.

“Kate has researched various birthing methods,” a source told Grazia magazine in June. “She wants it to be natural, so hypnobirthing is one option that appealed and she has been reading up on it and listening to CDs to get into the right frame of mind. Some of her friends have used this method and swear by it. Kate wants to do it her way and to be relaxed.”

She’s apparently also put together a playlist to lighten the mood in the delivery room.

“She has been filling her iPod with music she wants playing while she’s in labor,” a source reportedly told E!. “The other day she downloaded some of Bruno Mars, Calvin Harris and Of Monsters and Men.”

Sounds like she’s on top of everything — typical Kate!

Ready for the royal baby? Insider details on Kate’s nursery!
How will we learn of the birth of the royal baby?
Kate Middleton makes final pre-baby public appearance