Military veterans are getting special treatment this Fourth of July. They can see Roland Emmerich’s latest film White House Down for free. 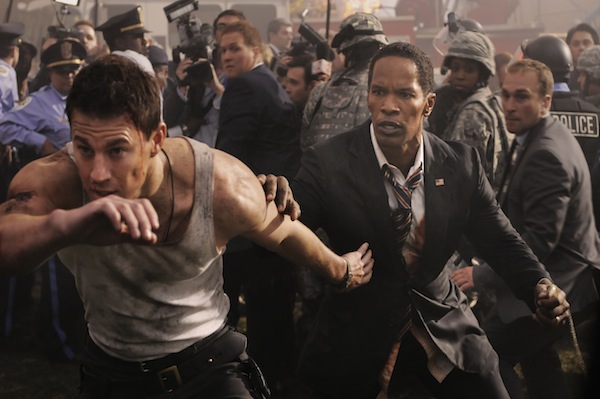 Sony Pictures is feeling patriotic. The studio has announced a special offer for active military personnel and veterans heading to theaters this week. On Independence Day, they’ll receive free admission to any screening of the action-fest White House Down.

According to The Hollywood Reporter, the offer is only valid for this Thursday, July 4. If you’re interested, bring your military I.D. to one of these theater chains: Regal Entertainment Group, AMC Theatres, Cinemark and Carmike Cinema. You’re allowed to bring one guest and seats are on a first-come, first-served basis. So get there early!

Channing Tatum vs Everyone in White House Down trailer >>

Rory Bruer, Sony’s president of worldwide distribution said, “We think White House Down is the summer’s best action movie. [Seeing White House Down] is a great way to celebrate the holiday and to honor and thank the troops for their service to our country.”

To be fair, it’s also a great way for them to cash in on the holiday. Plus, White House Down could use some positive word of mouth. When the film debuted last weekend, it earned a disappointing $24.8 million. It came in at No. 4 behind World War Z, The Heat and Monsters University.

White House Down centers on a former soldier who attempts to get a job with the president’s Secret Service. As he tours the White House with his daughter, the building is attacked by terrorists. The film stars Channing Tatum and Jamie Foxx and is directed by Roland Emmerich.

White House Down is in theaters.