Melissa finally releases that tight lip, which makes her look like a whole new person. Forget the juicy details she shares. 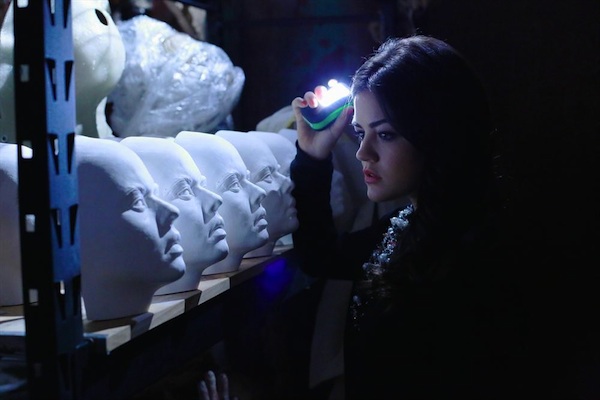 Melissa’s been wearing the same expression since she was first introduced on Pretty Little Liars. It’s that look like she smells something rancid and is simultaneously tasting something sour. Her lip curls in this way and her head cocks just so slightly. We just thought that’s how her face was.

Surprise! Turns out the girl was just holding back so much information it was eating away at her. She finally spills some details on A, and it’s like seeing a whole new person.

Emily’s dad arrives home, and her parents want answers just as Emily (Shay Mitchell) discovers she has a partial tear in her rotator cuff that may require surgery. Her swim career is in jeopardy and so is her family. Emily still doesn’t tell her parents anything, which leads to an argument and Emily storming out of the house. We’re not really sure why Emily won’t just confide in her parents. They’re both deserving of her trust. She wants to protect them, sure, but she’s just making things worse now that family services thinks she’s being abused.

Hanna’s got a domestic disturbance of her own. Caleb tells Hanna (Ashley Benson) about Ashley’s visit and the missing gun just in time for a new detective to arrive on the scene. Her name is Linda, and she takes a particular interest in Hanna, asking lots of questions.

Toby’s mom may have known A 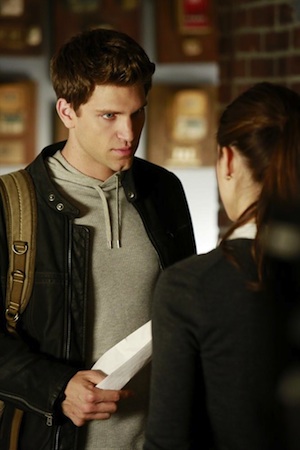 Toby and Spencer (Troian Bellisario) find the location of a man named Dr. Louis Palmer who was working at the hospital when his mother died. Toby meets with him but discovers Palmer isn’t a doctor at the hospital. He’s a patient, and he’s gone a bit insane. He still thinks Toby’s mother is alive. Before Toby leaves, Palmer asks him to tell his mother to “stay away from that blond girl” because there’s something wrong with the air around her. Creepy.

Spencer and Aria (Lucy Hale) plant the mask so Melissa finds it. Once she realizes what it is, Melissa takes off to Hector’s shop and begins destroying all of the masks Hector made of her face.

In a flashback, we see Alison confronting Hector about the money he owes her. She says she’ll take the money he has on hand and call it square. She gets in the passenger seat of the car and drives off with someone. It was the last time Hector saw her.

Spencer confronts Melissa who traded her face for information just like Emily. Melissa thinks Alison might still be alive. Melissa says she and Wilden had the same costume on that night on the Halloween train. Wilden was the one who tried to kill Spencer, and Melissa wasn’t helping him. She was afraid of Wilden. But she thinks somebody more dangerous was telling Wilden what to do. Melissa didn’t know about the plan to hurt Spencer until she was on the train. Spencer is mad because Melissa didn’t warn them, but Melissa gets angry and says she’s always been protecting Spencer, since the beginning. (The whole conversation is very cryptic. If Melissa wants Spencer to understand, why doesn’t she just tell her the whole truth?)

Emily goes back to her house late that night, and the police are there. Someone called about a domestic disturbance at the house from the family’s argument.

Melissa doesn’t waste any time and skips town. Forget trying to make her little sister understand. And what about Melissa’s grand plan to protect Spencer? It seems like she’s ditching that idea too.

Right after all the drama with Melissa, Hanna shows up at Spencer’s house. Hanna thinks her mom killed Wilden, and A knows it.