Ever since we laid eyes on the glorious new Great Gatsby film, we’ve been dying for another solid book-to-movie adaptation. Here are 10 other classic high-school reads we’d bring to the big screen if we had our druthers.

The Grapes of Wrath by John Steinbeck 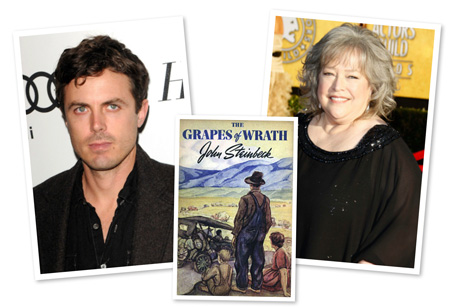 Described as “a great American novel,” The Grapes of Wrath earned Steinbeck the annual National Book Award, a Pulitzer Prize and even reportedly contributed to him nabbing the Nobel Prize. Although a famous film version starring Henry Fonda was made, it was released in 1940 — meaning this timeless tale of the plight of the Joads and thousands of other “Okies” during the Great Depression could definitely use revisiting. For Tom Joad, we’d cast underrated actor Casey Affleck. To play his flinty “Ma,” we’d go with Kathy Bates — we envision a less comical version of her character in The Waterboy.

The Red Badge of Courage by Stephen Crane 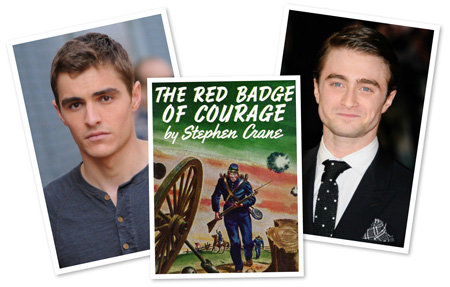 Crane’s classic war novel was written in 1895, yet its themes are as relevant as ever today and could speak to an entirely new generation of young men who go to war but face conflicting emotions of pride and shame, fear and courage. Audie Murphy played Henry Fleming (aka The Youth) in the 1951 film, so we’d cast a modern day look-alike, Harry Potter actor Daniel Radcliffe. To play his chatty buddy Wilson, “the loud soldier,” we’d like to see rising star Dave Franco.

Cat on a Hot Tin Roof by Tennessee Williams 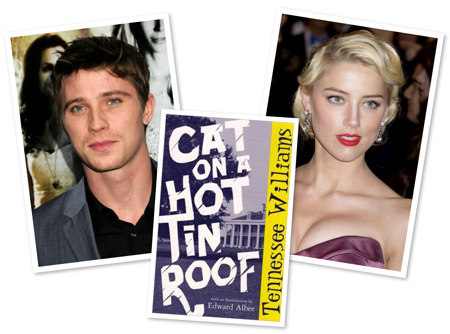 This is a toughie, because this Pulitzer Prize-winning play by Tennessee Williams made it to the big screen with two very heavy hitters in the lead roles: Paul Newman and Elizabeth Taylor. But, as the movie was made in 1958, this look at social mores, sexual repression and “mendacity” in the South merits another shake. We could not think of an actor better suited to play the part of Brick than Garrett Hedlund. Did you see him in Country Strong? And to capture the essence of his beautiful, determined and wily wife Maggie, we’d opt for Texas native Amber Heard. 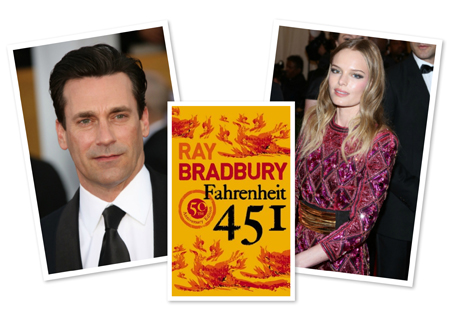 Bradbury’s dystopian classic was way ahead of its time when it was published in 1953, and it still is — although some may feel we aren’t very far from the tome’s version of the future, in which books are outlawed and the houses containing them burned to the ground by firemen. We like Mad Men actor Jon Hamm for the role of Guy Montag — the firefighter who dares to question the vapid existence of those around him (as well as his own) — and we think Kate Bosworth could nail the part of his apathetic wife, Mildred.

The Pearl by John Steinbeck 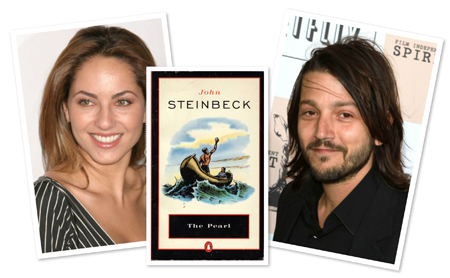 Let it be said, this would — undoubtedly — be a dark movie, just as the book is dark. Still, with a focus on superficiality and the priority people place on material objects and money, Steinbeck’s novella could make for a rather relevant experience for modern moviegoers. Plus, we’d love to see the lush seaside locale they choose. The role of main character Kino proved a tug-of-war for us between gorgeous Gael García Bernal and his Y Tu Mamá También co-star, Diego Luna but, ultimately, we felt Diego was a better fit. We’d pair him with pretty Mexican actress Bárbara Mori for a wife. 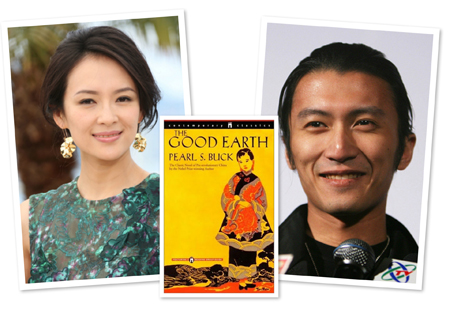 It would be interesting to see Buck’s masterpiece immortalized by today’s cinematographers. Between the fertile Chinese countryside and the dizzying, rickshaw-drawn city, the novel is rich with scenery. It also calls attention to issues such as oppression and wealth as a moral corrupter. For O-Lan, arguably the book’s most interesting yet underappreciated character, we suspect Zhang Ziyi would bring a special depth to the role of the long-suffering wife of Wang Lung — who would be played by Chinese actor and singer Nicholas Tse. 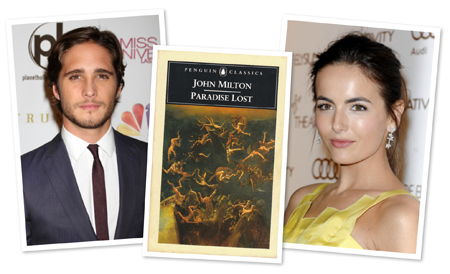 Okay, so technically this isn’t a book… but seeing as it’s an epic poem with over 10,000 lines of verse, it may as well be. Is anyone brave enough to tackle Milton’s biblical story of the fall of man? As for casting, we can’t actually take the credit for our picks — Diego Boneta and Camilla Belle were the rumored frontrunners in director Alex Proyas’ since-scrapped adaptation. We thought it might still happen when we got wind of a movie of the same name slated for release in 2014, but alas, it’s just a movie with Benicio del Toro and Josh Hutcherson about a surfer. Bummer. 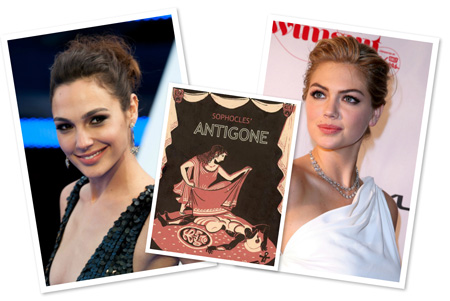 There have been several film adaptations of Sophocles’ Antigone, but it’s about time someone produces a modern version that really has staying power. One of the bravest females in Greek literature, Antigone just begs to be played by a gutsy modern actress. Our pick? Israeli actress Gal Gadot, who showed off her tough chops in 2011’s Fast Five (and who just so happens to be a tough, motorcyclin’ chick in real life, too). In contrast, the first person we thought of to play her sister/foil is classic beauty Kate Upton. 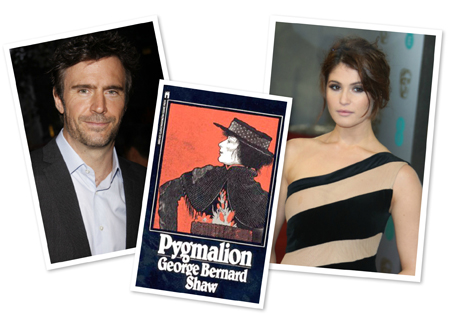 Shaw’s riff on a popular character in Greek mythology, the play Pygmalion tells the story of a man named Henry Higgins who bets he can rid a flower girl of her Cockney accent to make her fit to be called a lady and part of the upper crust. Since Audrey Hepburn’s Eliza Doolittle would likely intimidate any actress, perhaps the role could be given a fresh spin by making her Southern. But, if we’re sticking with Brits, we’ve gotta go with Hansel & Gretel actress Gemma Arterton for Eliza and Smash’s Jack Davenport as Professor Higgins.

The Catcher in the Rye by J.D. Salinger 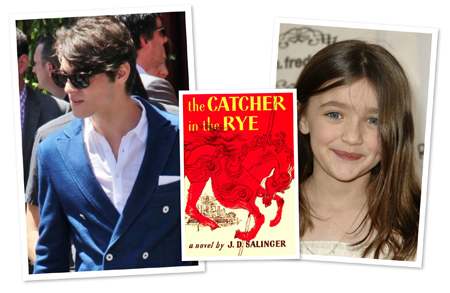 How is it that the classic tale of angsty Holden Caulfield has yet to make it to the big screen? Mostly because Salinger doesn’t think it’s possible to adapt the character for film. In a letter he penned to a producer in 1957, he wrote, “It would take someone with X to bring it off, and no very young man, even if he has X quite knows what to do with it. And, I might add, I don’t think any director can tell him.” Well, we’d sure like to see Breaking Bad’s RJ Mitte give it a shot. We think cutie-pie actress Ashley Boettcher — most recently seen in Judy Moody and the Not Bummer Summer — could play Holden’s precocious little sis, Phoebe.