It’s a girl for actor Tracy Morgan and his fiancée who gave birth on Tuesday. The comedian already has three sons from his previous marriage. 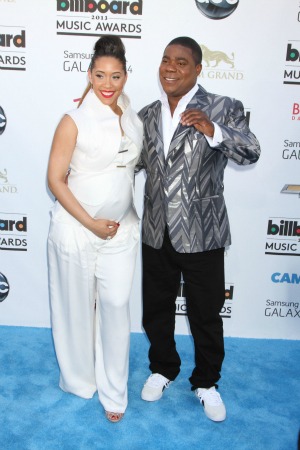 There are going to be a lot of Hollywood ladies for Jessica Simpson’s new son Ace to date when he gets older. On Tuesday, actor Tracy Morgan and his fiancée Megan Wollover were thrilled that their daughter, Maven Sonae Morgan, joined the world.

The former 30 Rock star told People magazine exclusively, “Mother and child are doing fine. Love to all my fans and thank you for your support. We hope to see you soon.”

The newborn girl arrived just after midnight at 12:03 a.m. in New York. She weighed in at 7 pounds, 3 ounces and measured 19.59 inches long.

Colin Hanks welcomes daughter No. 2 to the world >>

This is the first girl for Morgan, who already has three grown sons from his first marriage: Tracy, 27, Malcolm, 26, and Gitrid, 22. With so many boys in the house, the comedian was thrilled to hear that he was having a girl.

In a late January interview with Rolling Stone, the 44-year-old shared his dream of having a daughter.

He revealed, “You know what happiness is? Happiness is a simple thing, man. It’s having something to look forward to.”

Ready for the royal baby? Insider details on Kate’s nursery! >>

The couple became engaged in 2011. Wollover is a 26-year-old former model who is credited by the former Saturday Night Live star for getting him through the controversy surrounding a gay slur he uttered during his stand-up routine in 2011.

With the end of his NBC sitcom and the birth of his daughter, Morgan is ready for a new beginning. He will next be heard as the voice of Luiz in the animated feature Rio 2.