The Hollywood baby boom continues! On Tuesday, Colin Hanks and his wife welcomed their second daughter into the world. 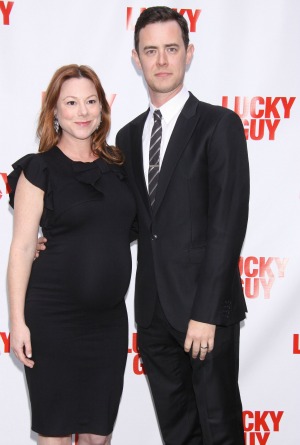 There’s another new baby in Hollywood! Joining the baby boom with Jessica Simpson and Kim Kardashian‘s newborns is a baby girl born to actor Colin Hanks and his wife Samantha Bryant.

This is the second daughter for the couple who are already mom and dad to big sister Olivia Jane, 2 1/2. The new addition, Charlotte Bryant Hanks, joined the legendary acting family on Tuesday.

Hanks told People magazine exclusively, “Ms. Charlotte Bryant Hanks has decided to join us. She’s as happy and healthy as we are overjoyed and tired.”

The former Dexter star and his wife married in 2010.

The 35-year-old actor is the son of Tom Hanks and his first wife, the late Samantha Lewes. His stepmother is actress Rita Wilson, so the grandparents are quite excited about the new bundle of joy.

The elder Hanks just finished his Tony-nominated role in the Broadway show Lucky Guy, so grandpa will have plenty of time on his hands to babysit.

Channing Tatum during childbirth: I had a “crying fit” >>

In 2011, the younger Hanks joked to People about his dad after the birth of his oldest daughter, “They cannot wait to just dote on this kid with every single fiber of their being. My wife and I are more than happy to give them our baby and say, ‘Here, watch her while we take a nap!’”

Hopefully, Tom and Rita are ready to do double duty now that there are two granddaughters in the house!