Kristen Stewart made her first public appearance since her breakup with Robert Pattinson, stepping out at the Chanel show at Paris Fashion Week.

Looking none the worse for wear after her breakup from ex Robert Pattinson back in May, Kristen 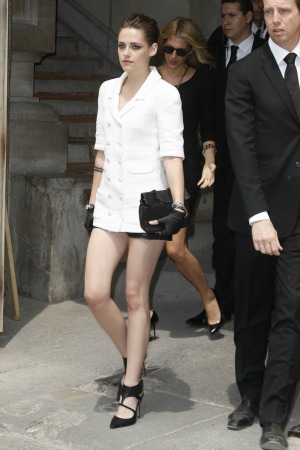 Stewart made her first public appearance since the split. Wearing a white jacket, black strappy heels and tight black shorts, Stewart attended the Chanel show at Paris Fashion Week. She even managed a few shy smiles for the fans and photographers who stood by as she made her way in to the show.

Could it be that Stewart is ready to move on? After all, it’s been over a month since Pattinson packed up his things and moved out of her home, so maybe she’s ready to start life over again. She went out on her own this time, which is a definite step forward. Who knows? Maybe next time we’ll see her out and about with a new beau.

Stewart understandably leaned on her friends for support after the breakup, including gal-pal Taylor Swift. In the days immediately following the split, Stewart was seen hanging out at Swift’s Beverly Hills home. She looked chipper and content back then, but who’s to say how things have been going for her these past few weeks? The fact that her appearance at Paris Fashion Week was basically the first since the breakup could hint that she took the split from Pattinson pretty hard. If that’s the case then it’s good to see her stepping out again.

As for Pattinson, he seems to be doing OK after the breakup as well. Recently he agreed to become the new spokesperson for Dior, joining quite an elite group made up of other actors, as well as models.