Once again Nick Cannon’s diva wife, Mariah Carey, is being accused of lip-syncing her way through a live performance. The “Awesomely Bad Lip-Syncing” hall of fame is getting kind of crowded, don’t you think? Is Mariah the supreme ruler of awesomely bad lip-syncing? She has a lot of competition. Watch these epic fails and cast your vote below. 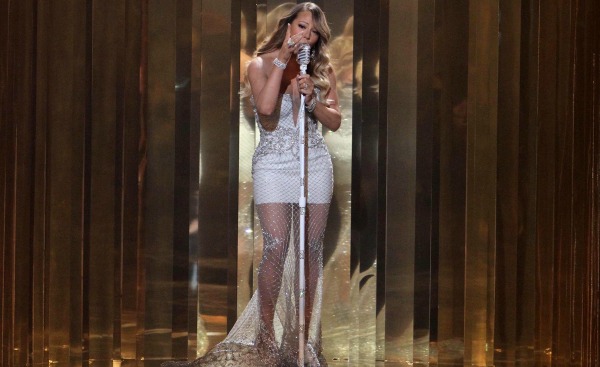 The #beautiful songstress is getting a lot of heat for a botched lip-syncing performance on the BET Awards that was anything but beautiful. It was straight up painful. And it’s not the first time Mariah Carey has been accused of lip-syncing her way through what is supposed to be a live performance. She was called out for faking her way through a 2008 Good Morning America performance and recently was slammed for mouthing the words during an American Idol performance. (Her rep was quick to deny the BET Awards and American Idol allegations.) Judge for yourself. (Note to Mariah: Holding your hand over the mic and concealing your mouth doesn’t hide bad lip-syncing.)

Madge thrilled fans everywhere when she took to the stage for a not-so-live performance during the 2012 Super Bowl halftime show. Queen rival Elton John prophesied the lack of live vocals on Good Morning America before the event when he told the Material Girl to “lip-sync good.” Zing. Madonna was obviously listening. This performance had it all — awkward dance moves, Madge falling off the back of the bleachers, 54-year-old cheerleaders and lip-syncing.

This category is thick with divas! “It’s Britney, B****.” Or is it? It’s Britney Spears lip-syncing to a Britney recording, so therefore it is Britney. Whoever dreamed Britney performing in her underwear would be boring? Outside of Britney missing a step here and there and stumbling, this 2006 VMAs performance was DOA, making it the opposite of “live.” There just comes a time when a gal should hang up the thigh-high boots, put on some clothes, sit down (before you fall down!), and sing without the help of pre-recorded music.

Ooooo. That’s embarrassing. You see, epic lip-syncing fails aren’t just reserved for divas. At the 2007 BET Awards, the DJ played a different version of “Amusement Park” than 50 was expecting. Rapper 50 Cent did what any live performer would do when the not-so-live track derailed — he hollered, “What the f***” and wandered through the audience saying, “What’s up?” 50, you crashed and burned, that’s what’s up.