Don’t know who Natalia Kills is? She’s the girl who sings all your darkest thoughts. 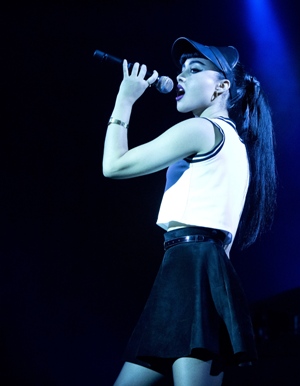 Why save all the fun for rap and heavy metal? But readers beware, this isn’t music you want your budding teenager to indulge in.

Pop music used to be the pool from which teens would pick their role models — but those pop stars were maturing right along with their listeners. And now, rebranding squeaky clean pop isn’t too hard these days, given Barbadian bad girl Rihanna went from island-loving teen with beach waves to a tattooed, Mohawk-donning woman seemingly overnight. Not to mention the transformation Miley Cyrus recently experienced — and she’s hardly the only artist to transform her pristine image.

Adding yet one more diva to the list, meet half Afro-Jamaican/half Uruguayan Natalia Kills, a woman who commands both your respect and attention. Her music has a rawness about it that continues to reposition the way listeners view the pop genre. When you watch her music videos, she leaves little to the imagination in terms of sex appeal. She’s been on the scene for a while, dropping tantalizing tracks like “Mirrors” and “Kill My Boyfriend.”

And now she’s given Rihanna’s notoriously controversial singles “S&M” and “Birthday Cake” some competition with her own version, titled “Problem.” The recently released music video captures visually what she intended lyrically, and it gives her music a darkness that encourages you to play it when you want to feel sexy and empowered, not sentimental. With lyrics like, “Don’t you want to claim my body like a vandal,” you don’t have to wonder for too long what this song is about — she further reveals how much of a “problem” she is. When you listen, readers, let us know who you like better!

Is Rihanna a bad role model? >>

So if you’re enticed by doing what you want whenever you want, and being rebellious as a form of stress release, you’ll be a fan of this latest video. And if you’re wondering what her name is about, it stems from her perfectionist tendencies that have her striving to “kill” her goals (go above and beyond the call of duty). I’d say she also “killed it” with this music video. It’s raunchy enough to get the point across, but mysterious enough to keep us wanting more!

Want more music news? Sign up for our newsletter and never miss a beat! >>

Her new album Trouble hits stores this year, so keep your eyes peeled if you end up digging this track!

Want more music? Check out these other music reviews: