On Under the Dome this week, we discovered that *gasp* the barrier is in fact a dome. No one saw it coming. 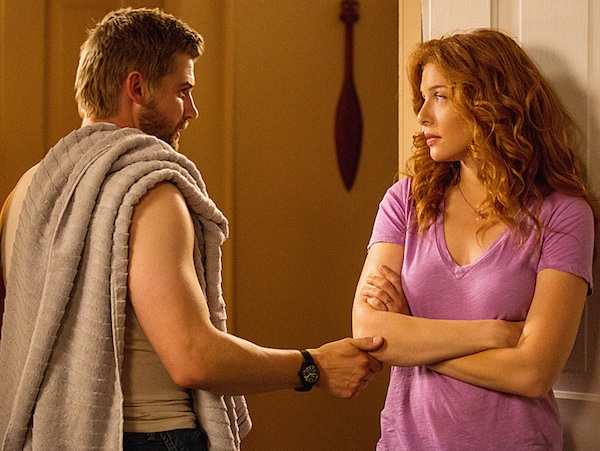 But no one is taking off their clothes… yet. (like Mike Vogel. Please?) Now that we know he was acting in self-defense, not brutally murdering Julia’s husband Peter, we rest assured our hero is on his way to big things. (Take this as you will.)

Sure Julia misses her husband, but not enough to stop the flirtation when Barbie wakes up in her spare bedroom. Granted, she doesn’t know Peter’s dead yet.

Big Jim is trying to act like the hero, but let’s be serious. No we’re not still talking about their looks. We’re talking about their secrets. (OK, turn your wandering minds off now. Back to the show.) Big Jim is hiding something, and Duke knew about it. He was trying to spill the details to Linda when he died, which means Big Jim isn’t so broken up about Duke’s death. Lester, the town’s minister, is also in on the secret with Big Jim. When Big Jim finds Duke’s will, the two begin to get nervous. Duke left Linda, who he loved like his own daughter, his house. Big Jim sends Lester on a mission to clean up their mess.

Meanwhile, Julia tries to get the attention of the military beyond the wall. They ignore her. The soldiers are under order not to interact with the people of Chester’s Mill. Julia thinks the military is responsible. She heads to the radio station to see if she can listen in on their radio conversations.

Angie is still stuck inside the fallout shelter and things keep getting worse for her. Junior chains her to the bed when she tries to escape. He is still convinced Angie is having an affair with Barbie. Despite Junior’s clear instructions that he wants Angie to go back to the way they used to be, Angie tells Junior she’ll never love him again. Really? Was that a smart move? The guy holding you captive tells you you’re going to stay locked in a cellar until you love him again, and you tell him you’ll never love him. Maybe try playing along just a little.

Julia goes to the radio station and is able to tap into a military signal. She overhears that the military is calling the barrier a dome. Newsflash: They just used an episode and a half to conclude that the barrier is a dome. Surprise? The show is called Under the Dome. Speed it up people.

Here’s what you missed on Under the Dome >>

Back at the dome line, a police officer named Paul arms Linda and her partner so they can protect themselves in the coming craziness. (Paul has clearly lost his marbles.) He sees Barbie walking through the forest near the road and pulls a gun on him.

The officers are quickly distracted, though, when smoke rises in the sky under the dome. There’s a fire at Duke’s — now Linda’s — house. Barbie starts delegating, telling people to use any buckets they can find to hold water to put out the fire. If the blaze gets out of control, it could take down the whole town, and the people with it. Doesn’t this episode come at a really bad time with everything that’s happening in Arizona?

There’s someone inside the house, and Linda rescues him just before the house explodes into flames. The man is Lester.

Big Jim tears downs the house with a tractor smuggling the fire and saving the town, but also destroying any remaining secrets the house may have held.

We discover that Lester is the one who started the fire, trying to “clean up their mess” on Big Jim’s orders.

Paul ruins the happy mood after the fire is out by saying the dome is trapping smoke. He pulls a gun on the town, but turns the gun on the dome firing twice. The bullets bounce off and hit another officer named Freddie, killing him. Barbie is able to disarm Paul in the commotion.

Last time on Under the Dome >>