Hugh Jackman wants the world to know he is straight. It’s time for the gay rumors to end about the hunky Australian actor. 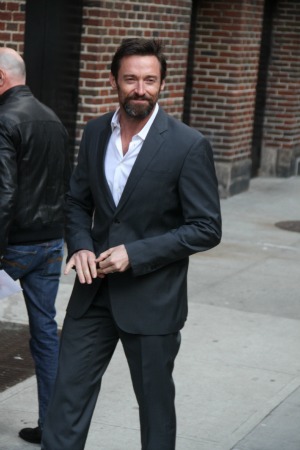 Enough is enough! Hugh Jackman is desperately trying to put an end to the gay rumors that have chased him for most of his career. In an interview with the Australian version of 60 Minutes, the actor admits that the endless rumors are exhausting for his family.

He shared with the news magazine, “It’s, to me, not the most interesting things about a person, anyway. I do get frustrated for Deb, cause I see Deb go, “Ah, this is just crazy!”

Hugh Jackman faces his demons in The Wolverine >>

His wife of 17 years, Deborra-Lee Furness, has found the whole situation even more upsetting than her husband.

She told the television show, “If he was gay, fine, he would say he’s gay. It’s annoying because it’s not true.”

Furness even went on to say that the rumors were downright “offensive.”

Jackman addressed the rumors in February in a Hollywood Reporter article where he talked about how upset his wife was.

He revealed, “Just recently, it bugs her. She goes: ‘It’s big. It’s everywhere!'”

The source of the rumors has never been identified, but Jackman has taken on a variety of roles including Curly in the musical Oklahoma! in the West End, Wolverine in the X-Men series and gay icon Peter Allen in The Boy From Oz on Broadway. He has never shown any fear with the types of characters he has played.

Even his co-workers sometimes feel the need to defend his marriage due to the rampant gossip.

She continued, “I met him when he did Oklahoma! [at London’s Royal National Theatre in 1999]. He was genuine, hugely talented. He was in love with his wife that day and still is.”