San Diego Comic-Con will feel a little empty this year because The Hobbit: The Desolation of Smaug will be M.I.A. Director Peter Jackson confirmed that he won’t be on hand for the convention. 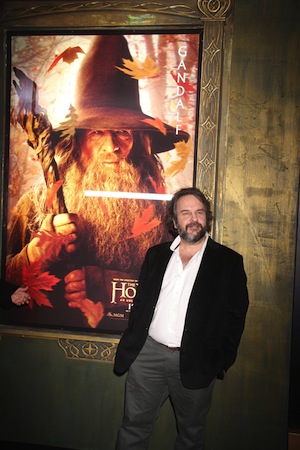 In Dec. Warner Bros. will release the biggest fantasy film of the year. Prepare yourself for The Hobbit: The Desolation of Smaug. It’s the highly anticipated follow-up to last year’s The Hobbit: An Unexpected Journey.

Last July, director Peter Jackson took some of the film’s cast to San Diego Comic-Con to promote its arrival. But The Desolation of Smaug won’t get the same treatment.

Jackson has confirmed that Comic-Con is a no-go. According to Access Hollywood, he posted a video on his official Facebook page breaking the news. He said, “I told Warners that I just really wasn’t ready to present anything of The Desolation of Smaug at Comic-Con this year.”

Answers to your burning questions about The Hobbit >>

Jackson continued, “We’re still shooting and we’re gonna be shooting through the period of Comic-Con, so we looked at what actors we could send to make a really cool panel. There wasn’t really anybody available. I can’t go.”

If you’re a die-hard Hobbit fan, this must be heartbreaking to learn. But try looking at the glass half full. Jackson is using the extra time to make the movie better. We’ll take a polished, finished product over a few minutes of early footage.

“This is the last ditch shooting that we’re doing and it’s going fantastic and these are gonna be great movies and I just had to take the Comic-Con burden, if you like, off my shoulders,” he said.

The Hobbit: The Desolation of Smaug opens in theaters Dec. 13.

Will you be attending Comic-Con this year?