American Idol‘s Velvet Teddy Bear is in need of a little help losing weight. That’s why Ruben Studdard is turning to The Biggest Loser. 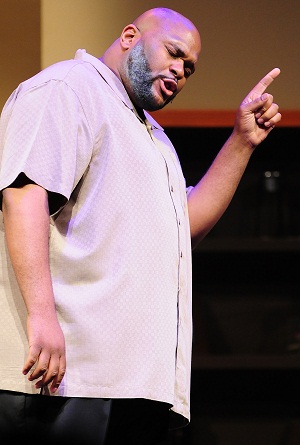 American Idol‘s lovable Season 2 winner, Ruben Studdard, is heading to the Biggest Loser Ranch! The soulful singer, often referred to as “the velvet teddy bear,” has struggled with his weight throughout his life and now he’s turning to Bob Harper and Jillian Michaels for a little tough love and hoping that airing his struggle on national television will help him keep it off.

Want to be on The Biggest Loser like Studdard? Here’s how! >>

His stint on The Biggest Loser won’t be Studdard’s first attempt at losing weight. Most notably, the Idol winner shed 70 pounds (or one 5th grader) when he went vegetarian in 2006. Sadly, emotional turmoil often triggers weight gain and the 37-year-old recently went through his own personal storm. In 2008, Studdard thought he had found the love of his life and was married. Three years later, the drama that came with his divorce triggered a new weight gain.

TBL‘s Gina McDonald opens up about her weight-loss journey >>

2012 wasn’t all bad, though. It marked the March release of his latest album, Letters from Birmingham. The album went through all the stages in a romantic relationship, including the end with the R&B-esque “June 28th (I’m Single).” Hopefully the album served as a healing process.

Nothing new has come from the Studdard camp since the album, but his time on The Biggest Loser may all be part of a publicity campaign for another new album. Whether there’s another motive behind Studdard’s appearance on the show or not, we’re still rooting for him. Getting healthy ought to ensure that the singing teddy bear will be around for a lot longer. And, who knows, maybe viewers will even be treated to a few songs along the way!

The new season of The Biggest Loser begins Tuesday, Oct. 8 at 8/7c.

Celeb news can be delivered to your inbox, if you sign up for our newsletter! >>