Kyra Sedgwick accidentally cut off part of her finger while chopping kale this weekend. Thanks to her husband, Kevin Bacon, her hospital visit was documented. 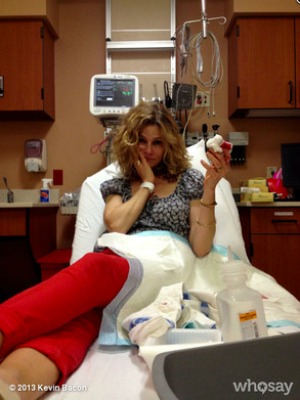 While many nutritionists recommend adding kale to your diet, they also want you to be safe while preparing it in your kitchen. Actress Kyra Sedgwick didn’t heed that warning this weekend when she accidentally cut off the tip of her finger while chopping kale.

The Closer star’s kitchen mishap was revealed by husband Kevin Bacon on his Twitter and Whosay accounts on Saturday.

He wrote, “@kyrasedgwick in the ER. Kale isn’t ALWAYS HEALTHY… if you chop the end of your finger off.”

Kyra Sedgwick reveals the secrets of her happy marriage >>

The tweet included a photo of the 47-year-old actress in the emergency room with a bloody bandage on her left hand. Naturally, she looked a little unhappy posing for the photo.

Being the trouper that she is, Sedgwick posed for a second photo so Bacon’s followers could get the update on her condition.

He told everyone, “My Baby is fine. All good. Still can’t find the tip of that finger @kyrasedgwick.” 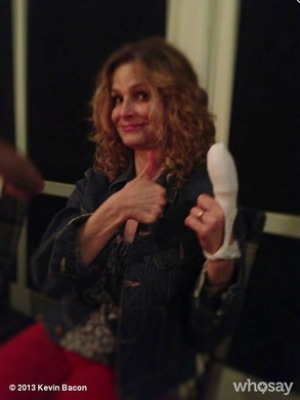 In the second photo, she has her game face on and gives a thumbs-up with her healthy hand while her left index finger sticks straight up in the air with a large bandage. Hopefully, her hubby will be doing all of the cooking over the Fourth of July holiday.

Kevin Bacon: Losing money in the Madoff scheme was emotional >>

Sedgwick isn’t the only Hollywood celebrity to have an accident with their fingertip. Sandra Bullock’s ex-husband, Jesse James, shared gruesome photos of his right pinky-finger after he cut off part of it at his Austin motorcycle shop. He later had to undergo surgery to repair the finger.