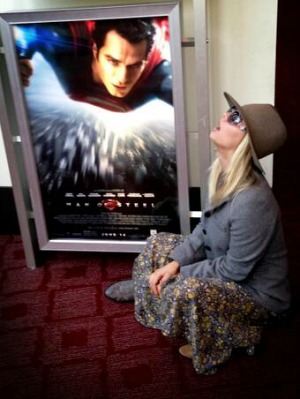 The Man of Steel has found himself dating one of the hottest ladies on television. According to Us Weekly, Henry Cavill is dating The Big Bang Theory‘s Kaley Cuoco.

There’s no information yet on how these two hooked up, but Cuoco has been dropping hints to her Twitter followers.

On June 14, the 27-year-old actress tweeted a photo of herself by the Man of Steel movie poster. She gave the film a thumbs-up by writing, “Everyone go see ‘man of steel.’ It’s fantastic in every way.”

The handsome, British actor is starring in one of the biggest hits of the summer with the Superman reboot while Cuoco continues her work on the CBS geek TV show. They may seem like an odd couple, but it sounds like it is a match made in heaven.

A source revealed to Us Weekly that the 30-year-old Cavill is “a massive Big Bang Theory fan” who “has always wanted to date her.”

Another source close to the Superman actor shared, “They are totally hot for each other. He’s excited to be dating her.”

Cavill recently ended a 10-month relationship with actress Gina Carano in May while Cuoco broke up with musician Bret Bollinger earlier this year. She was formerly engaged to addiction specialist Josh Resnik, but they called off their engagement in March 2012. The hunky actor also called off his own wedding to equestrian Ellen Whitaker early last summer.

While neither of their reps have confirmed the pairing, let’s hope the news is true because that is one hot summer couple!