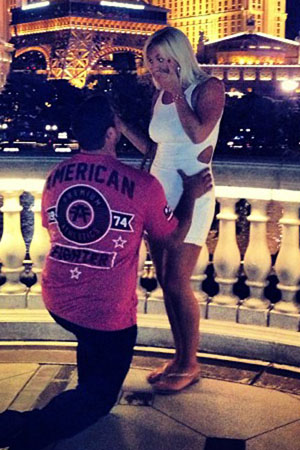 “Happiest moment of my LIFE I am marrying my best friend I woulnt [sic] choose anyone else I am so lucky and so grateful,” she wrote on Instagram over the weekend, along with a photo of Costa on one knee.

The former reality star also posted a few more photos of the special night, including one that showed just how much the moment took her by surprise.

“I look scary but this is the face of total SHOCK,” she captioned another photo.

Brooke, 25, is the only daughter of Hulk and his now ex-wife, Linda Hogan. The family — including brother Nick Hogan — gained notoriety as a part of the VH1 reality show Hogan Knows Best. She tried her hand at music, but she’s currently working with dear ol’ dad at TNA Wrestling.

As for how Hulk’s feeling about this? He hasn’t spoken publicly about it yet, but we assume he’s pretty sad about losing his “little girl.” The close-knit pair has been criticized for their relationship in the past, mostly because Hulk’s not afraid of looking at photos of his grown daughter naked or tweeting photos of her toned legs.

The questions over the closeness of their relationship eventually led Brooke to tell people to back off.

“A dad can’t even be proud of his daughter without sickos makin it something it’s not,” she wrote in January. “Go back to your farm animals. #ignorant.”

We hope Phil’s ready for Hulk as a father-in-law!