Former Teen Mom star Farrah Abraham is taking the natural next step in her quest for superstardom: She’s headed to rehab for alcohol abuse. 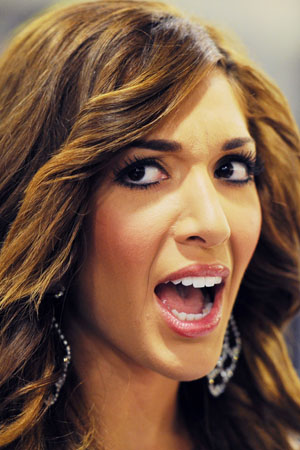 “At this time in my life, I need to stay focused on the positive to get through all of the negative that a DUI has caused in my life,” the reality star said in a statement to RadarOnline. “I’m 22 and I want to make better choices and ensure I can recognize when I am putting myself in a bad situation next time.”

The “bad situation” refers to her March arrest for DUI in Omaha, Nebraska. According to reports, Abraham blew a .147 on a field sobriety test — nearly twice the .08 limit. She later tried to deny the arrest in a tweet.

“It’s Amazing what people believe & makeup (LOVE MY LIFE) #Thank #God #I’msuccessful & I don’t care about drama! #HaveAGreatDay,” she wrote the next day.

The mom of toddler Sophia eventually owned up to her arrest after she was ordered to complete an alcohol education course and six months’ probation. She completed the course, but she “had difficulty making eye contact, was standoffish and was sarcastic when answering the questions asked of her,” according to her course evaluation report.

She even tried to start a friendship with Charlie Sheen, but he put the kibosh on any romantic relationship with Abraham and her “tranny boobs” after she leaked their texts to TMZ.

So, it seems like rehab is the only next step in her quest for attention. It might be, but the director of her Texas-based alcohol education course thinks she does need help.

Is Farrah Abraham sincere with her rehab trip, or is it just another way to get attention? Sound off below!