We haven’t seen the last of The Bible. Mark Burnett is adding another chapter to his hit miniseries. This time, he’s going from the History Channel to NBC. 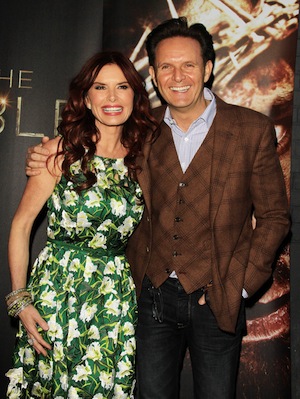 It’s no secret that Mark Burnett’s miniseries The Bible was a huge success. When it debuted last March it was a ratings juggernaut for the History Channel.

Both Burnett and co-producer Roma Downey, who also played Mary in the series, were taken aback by its numbers. Because of its roaring reception, they’ve decided to create a follow-up.

This time, they’ll take their stories to broadcast television thanks to NBC. According to The Hollywood Reporter, the sequel will be called A.D.: Beyond the Bible.

“We are thrilled to be working with Bob [Greenblatt, chairman of NBC] Jen [Salke, president of NBC] and Quinn Taylor [executive vice president of movie and miniseries for NBC] to bring the follow-up to our hit cable series The Bible to broadcast television with NBC,” said Burnett and Downey. “Our new series, A.D.: Beyond the Bible, is another massive project and a major commitment, but it’s a story that has to be told. It’s a story that changed the world. We look forward to making this an enormous television event on NBC.”

A.D.: Beyond the Bible will follow the drama after Jesus’ death and betrayal. Here’s part of the official log line via Entertainment Weekly:

“A perfect storm brews in the Holy Land, fueled by social injustice, Roman military oppression and religious unrest. High priests and the Herod dynasty vie for power. Zealot revolutionaries turn to violence to regain what they believe is their promised land. And in the face of terrible odds and brutal persecution, the small band of Jesus’ disciples stand[s] against the combined might of Rome and their own local authorities. In a generation of rebellion, war, famine, and carnage, who can they trust?”

Are you ready for more from The Bible series?