Miley Cyrus partied hard in Miami this weekend for a music festival, twerking and inadvertently flashing fans thanks to a wardrobe malfunction.

Miley Cyrus partied hard this weekend at a music festival in Miami, promoting her new single “We Can’t 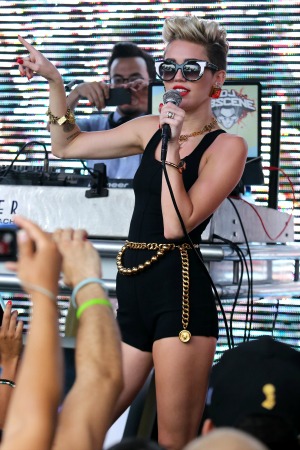 Stop.” On Friday the singer/actress performed at Mackapalooza and was caught taking some sexy selfies and coyly retweeted the photo that showed her caught in the act with the comment, “Busted taking selfies.”

Miley Cyrus issues ultimatum to dad on Twitter: Talk or else >>

Cyrus has been seen rocking major granny panties of late, but it was hard to tell what kind of undies she was sporting in the sexy outfit seen in her Twitter post. Even if she was wearing grannies under there, it was still a super-hot outfit — black tank, matching tight shorts and a heavy gold belt. E!Online posted a photo of the singer in the same outfit twerking for the cameras as she got ready for the party and this is clear: Granny panties or not, Miss Cyrus has an amazing body.

The party continued for Cyrus on Saturday as she got ready to give fans a very special surprise. E!Online reported that Cyrus gave some lucky fans, including iHeartRadio Ultimate Pool Party grand prize winner Natalie Bergen, a private listening party in a penthouse. Natalie went to the room to find Cyrus greeting her at the door and the place decorated with a balloon banner spelling out the word “Twerk,” as well as balloon rubber duckies and palm trees. The decorations also included phony money spread around the room.

Cyrus played a song off of her new album for her guests and while they chatted about the song, the singer’s top suffered a wardrobe malfunction that gave the girls more of a show than they could have ever expected. One of the contest winners came to Cyrus’ rescue and got the top fastened before she went completely topless.

Laughing off the incident, Cyrus signed a poster for Natalie with a P.S. saying: “Sorry about da t*****!”