Savi is ordered by the doctor to lower her blood pressure or she risks the health of her baby. There’s only one thing she can do, which will either help or make things worse depending on how Harry reacts. 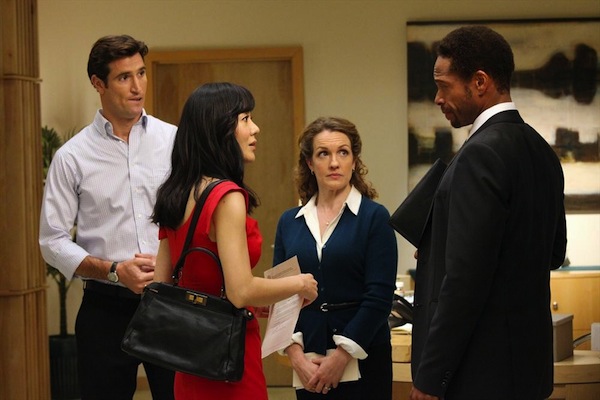 We are feeling the heat. We knew the sun was bringing it this week, but so is Mistresses. Joss and April both get some action, but that isn’t even the exciting news. Savi, on doctor’s orders to lower her blood pressure, makes a bold decision to come clean.

Harry notices Savi’s breath tastes different, like pennies. Metallic breath is a potential sign of pregnancy, and Harry gets excited. Harry wants her to take a pregnancy test, but Savi (Alyssa Milano) is reluctant because she hasn’t gotten the paternity results yet.

Meanwhile, Dominic is flirting with a new employee at the office, and Savi doesn’t like it. She sends the poor girl on a mission to Van Nuys (at least an hour drive from where they are depending on traffic) just to get her out of the office and away from Dominic. He confronts Savi about her jealous behavior and tells her he has strong feelings for her.

That night, Savi is about to take the pregnancy test, but she realizes she’s bleeding. She goes to the doctor, who tells her spotting is normal during pregnancy. Savi starts crying and tells the doctor she’s happy the baby is OK, but is she really? Her blood pressure and heart rate are off the charts. The doctor tells her to make changes to reduce stress for the health of her and her baby.

Savi finally comes clean and tells Harry she’s pregnant, but that the baby might not be his.

Lucy ditches school with Richard’s daughter, which means both parents end up in the principal’s office. April grounds Lucy for ditching school, but little Lucy isn’t going down without a fight. She says she didn’t ask permission because April’s been acting weird lately and never would have let her go anyways.

Richard visits April at her shop, pretending like he was just in the area. He can tell that something is off with her, and she spills the details on her husband’s affair. April admits she’s never had any fun and feels hopeless. Richard tells April there’s still time for her to do something reckless, which leads to them kissing, which leads to them sleeping together, of course. 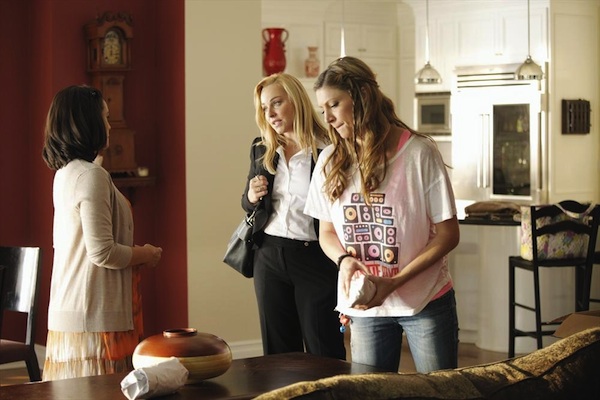 Alex is still trying to get over her relationship with Sally. After she and Joss go hiking together, Joss gets in the shower and Alex joins her. They start kissing, which leads to other things. Let me just say hands are plastered against the shower door.

After their romp in the shower, Harry sees the girls flirting and feeding each other fruit. He realizes what’s going on and leaves the room before they notice him.

Alex tells Joss she knows Joss isn’t gay despite their recent activities. They both don’t want a relationship and agree to be friends with benefits.

Harry sees Joss later that night and says he doesn’t understand her mucking her friendships up all the time. Harry doesn’t think she’s in the clear despite her conversation with Alex about where they stand.

Sally arrives home while Joss and Alex are moving out of the house. Sally thinks Joss is the reason their relationship didn’t work because Alex has feelings for Joss. And Joss seems to have feelings for Alex too. Joss ditches her new boy toy to spend time with Alex.

Anthony, the insurance investigator, shows up at Karen’s office again and wants her notes from her sessions with Tom. Karen won’t hand them over, saying she respects the privacy of her patients and doesn’t feel comfortable letting the insurance company have them. He threatens to subpoena her. New evidence in the case means the insurance company might bring criminal charges.

Karen meets with Tom’s wife Elizabeth to tell her that Anthony is snooping with a possible criminal investigation. Elizabeth says she’s going to forgo the insurance money. She asks Karen to tell the insurance company that Tom was suicidal and unstable in his last days. She wants Karen to make up the notes and give them to the insurance company so they can both move on with their lives. Fabricating notes could cost Karen her medical license. Elizabeth says she and Karen are in this together, and Karen needs to write these notes. That night, Karen sits down at her computer to type the documents, apparently complying with Elizabeth’s wishes.

32 mins ago
by Reshma Gopaldas

36 mins ago
by Giovana Gelhoren