Jennifer Lopez says she regrets performing for a brutal dictator — but not enough to return his cash. 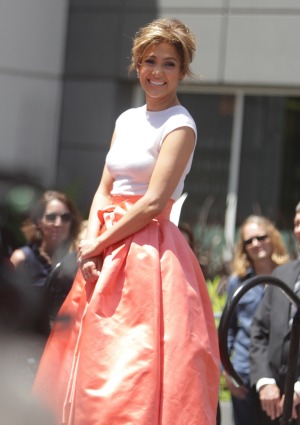 Jennifer Lopez had a pretty cushy gig last week: Get paid bank to sing “Happy Birthday” to a random politician in a foreign country. Sounds like the best paycheck ever, right? Except that the politician in question was a really, really bad dude.

Lopez traveled to the former Soviet bloc country of Turkmenistan on Saturday to take part in the birthday celebrations of leader Gurbanguly Berdimuhamedow, which is very nice except the guy is responsible for the country being “among the most repressive in the world,” according to Human Rights Watch.

Is Jennifer Lopez too sexy for TV? >>

Lopez’s reps tried to dodge any responsibility for the snafu, saying she was actually hired by the China National Petroleum Corporation as part of “a private corporate event that was presented to their local executives in Turkmenistan,” and was only asked to sing “Happy Birthday” to Berdimuhamedow minutes before she took the stage.

“Had there been knowledge of human rights issues any kind, Jennifer would not have attended,” her rep told the Associated Press.

Putting aside the fact that performing at the behest of China’s state-owned energy company has major political implications — and China is guilty of its own human rights violations — it is apparent that her people have never heard of a little thing called Google that they could use to do 3 seconds of research on their smartphones.

Jennifer Lopez receives a star on the Hollywood Walk of Fame >>

So what’s going to happen to her paycheck? The singer was paid an undisclosed sum for her performance, and while we don’t know exactly how much, stars of her caliber command into the millions for a private show. So now that she knows that she has profited from tyranny, will she return the cash? Not likely. Her rep’s statement pointedly avoided talking money.

“Lopez obviously has the right to earn a living performing for the dictator of her choice and his circle of cronies,” Thor Halvorssen, the president of The Human Rights Foundation, told The Hollywood Reporter. “But her actions utterly destroy the carefully crafted message she has cultivated with her prior involvement with Amnesty International’s programs in Mexico aimed at curbing violence against women.”

Lopez isn’t the first star to find herself in hot water over an ill-thought performance. In 2011, Hilary Swank was dumped by her PR firm after a birthday faux pas involving Chechen President Ramzan Kadyrov. Rolling Stone uncovered a dirty money trail leading from Muammar Gaddafi to Beyoncé, Nelly Furtado and Mariah Carey, all of whom were paid to perform for family members of the brutal dictator.