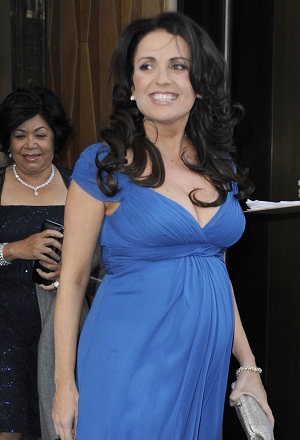 Flipping Out‘s Jenni Pulos and her husband, Jonathan Nassos have welcomed their first child, a daughter named Alianna Marika, into their lives.

Jenni Pulos admitted she was pretty frightened about being a mom >>

Pulos, 40, married Nassos in May 2012 after becoming engaged in November 2011. Their courtship, wedding plans and wedding were well-documented on Flipping Out, as the Bravo crew followed Pulos and her boss, interior designer Jeff Lewis, around California and through various remodeling projects and personal dramas.

According to reports, Pulos first became pregnant in January 2012, but suffered a miscarriage around the time of her wedding. Come October, she announced she was pregnant, again, however. This one brought about Jenni’s first child, Alianna, on June 29.

Did Jeff Lewis really “flip out” and sue Jenni over a book title? >>

When we last saw Pulos on Flipping Out, she and her boss, Lewis, were on shaky ground. Pulos went to Cabo, where she stayed at a client’s beach house. She didn’t tell Lewis of the circumstances of her trip and he believed it was because she knew he would disapprove of her using her work contact for a vacation. The Season 6 finale ended with Pulos and Lewis still struggling to overcome the information oversight.

Aside from starring alongside Lewis (and his fabulously mouthy maid, Zoila) on Flipping Out, she also appears on his show Interior Therapy, where Lewis and Pulos move into a home to redesign a room for an owner in need of a fresh outlook on not just design, but also on life. Interior Therapy returns to Bravo on July 9 at 9/8c.

Love celeb gossip? We’ve got a newsletter for that >>