Warlow begins his bad and dirty plan in Bon Temps, while Billith starts a mission to save the vampires at all costs. 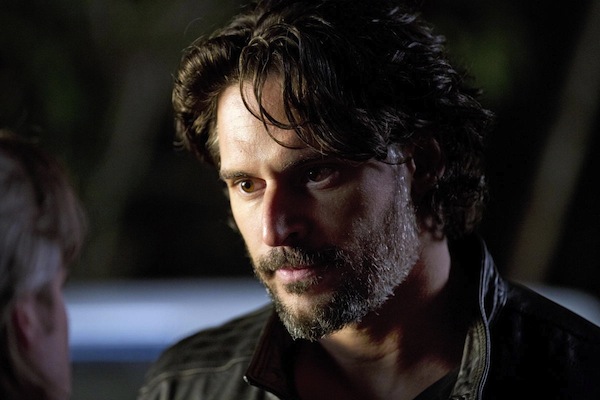 This week on True Blood, there isn’t much that’s true so the blood is starting to fly. Bill isn’t as almighty as he thinks, but that doesn’t keep him from scheming. Eric’s got his own ideas on stopping the war when he discovers the humans are experimenting on vampires at a secret camp. Sookie still just wants out but that doesn’t stop her from continuing to flirt with fellow half-faerie Ben.

The humans are experimenting

Eric (Alexander Skarsgard) is about to kill Willa when she tells him she knows information about her father’s experiments. SWAT enters the room, but Eric is already gone, and he takes Willa with him.

Eric brings Willa to Fangtasia where Willa tells Eric she doesn’t like what her father is doing either. Her father is using government money to run a prison and research facility to experiment on vampires. Willa doesn’t know where the camp is, though.

Pam, Tara and Eric pack up the bar and leave with Willa in tow.

Meanwhile, SWAT arrives at the camp with reverend-turned-vampire Steve Newlin.

Sarah Newlin is at the camp. Steve initially thinks she’s there to help him. She’s really just there for revenge. She says the camp is God’s master plan to eradicate the vampire race including him. She leaves Steve with the doctor who wants to know everything about Eric.

Bill decides to stop the burn

Vampires are going to burn, including Jessica. Bill (Stephen Moyer) doesn’t know where or when, but he knows he has to save them.

Bill thinks now that he’s Billith that he can stand in the sunlight. Jessica begs him to go inside, but he refuses and stands outside during sunrise. He begins to burn but doesn’t understand why. Jessica quickly drags him inside. Why did Bill have to test his theory by standing so far from his house and allowing his whole body to be in the light? Couldn’t he have saved himself the pain and just stuck an arm out the window?

The faeries are dwindling 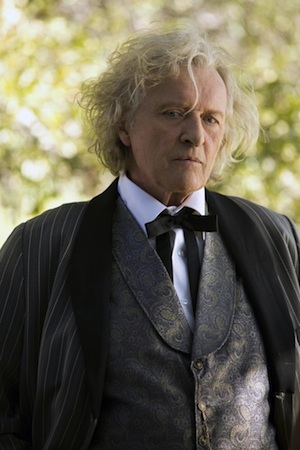 Sookie (Anna Paquin) is practicing with her faerie light when Warlow creeps outside the house. Grandpa Niall leaves to track the vampire down and Jason follows, collapsing just feet from the door. Sookie runs outside to help him, but Niall gets upset with her for risking her life. He explains that Warlow wants her because Sookie has royal faerie blood.

Niall heads to the faerie club but it has been ransacked. Warlow found his way inside and killed all the faeries. When Niall exits the club, he finds Ben wandering around. Ben explains his situation, and Niall offers him a place helping to defeat Warlow.

Willa offers to tell Eric more about her father. She likes vampires a lot. (Wink wink. Willa ain’t so innocent.) She gets a drop of Eric’s blood on her finger and goes to taste it, but he stops her and licks it from her finger himself. Then he tells her to go back to sleep, despite her obvious interest in doing other things.

Bill sends Jessica to talk to a man named Hito who is responsible for synthesizing the vampire drink Tru Blood. Then Bill heads to Sookie’s house asking for some of her blood so he can have Hito synthesize it and, hopefully, save the vampires from burning. She refuses to help, saying he’s had more than his fair share of her blood. Bill says she’s dead to him because she won’t help. Then he leaves.

Nicole and the U.S. Vampire Unity Society want to get footage of the werewolves and talk to them. When they arrive, the pack senses a threat. The society tries to explain, but Alcide finds a recorder and photos of Emma. Rikki freaks out and the pack begins to kill the society members.

Sam takes the opportunity of the commotion to get Emma back. Then they go to help Nicole escape too.

Andy catches Bill out late and apologizes that he has to enforce curfew. Bill sees a stuffed animal dog in Andy’s car as Andy explains he has children now. Bill smiles as he walks away because he no longer needs Sookie’s help. He can use Andy’s faerie kids to replicate the blood.

— Jason isn’t feeling so well. In fact, when we leave him, he’s passed out again. This time it seems to be serious, though. Maybe they’ll finally take him to a doctor.

— Andy’s faerie girls are now preteens. He spent this week trying to patch things up with Holly.

— With the new laws imposed by the government, a warrant is no longer necessary in order to search someone’s home. So much for the Constitution.

— Has Sam forgotten Luna so quickly? It seems so. Lafayette even sees it and warns Sam that Nicole from the U.S. Vampire Unity Society will be trouble for him.