She obviously doesn’t have the psychopath gene. Poor Deb is taking her first kill hard, snorting lines and sleeping with a drug dealer. Can Dexter save her? 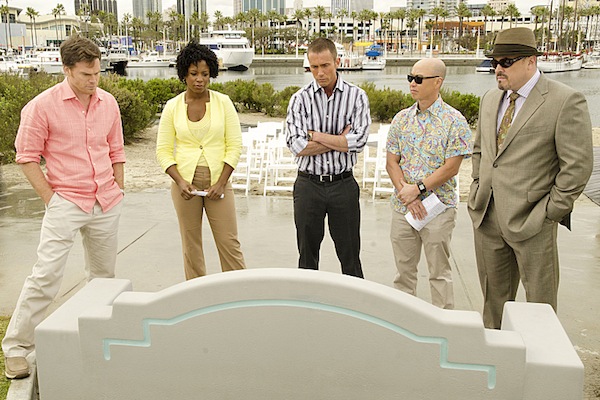 The rules have changed on Dexter. The final season has a bloody mess to clean up before they can wrap up the show. It’s gonna be good.

Deb’s a little too caught up in her case

Dexter (Michael C. Hall) is frantic about Deb’s whereabouts. He hasn’t seen her in two months. A search of her place turns up nothing. When he tries to call, her phone goes to a full voicemail. He thinks he has a responsibility to find her because he is the only one who knows what really happened to LaGuerta.

Meanwhile, Deb (Jennifer Carpenter) is snorting lines and sleeping with some drug dealer named Andrew Briggs she is supposed to be arresting. Andrew robbed a jewelry store and then skipped bail. The private investigation firm Deb now works for sent her out to retrieve him, but she got a little too caught up in the case.

A cranium killer is on the loose

Back in Miami, there is a new crime scene. The victim’s cranium was removed and a piece of the brain had been scooped out.

Dexter is distracted, though, searching for Deb. He hacks into her bank account and sees her most recent charges were made in Ft. Lauderdale. He tracks her down at a grocery store and confronts her. She tells him she’s just working the case. If she can retrieve the jewels Andrew stole along with arresting him, then she gets a bigger cut of profits, but she’s clearly gone over the edge. Dexter refuses to leave her until she says she shot the wrong person in that trailer. Andrew finds Deb and the two leave the store together.

In his frustration, Dexter strangles an innocent guy in a car and almost kills him until Dexter sees the child in the backseat. 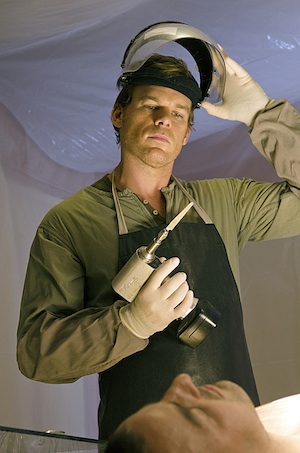 A so-called psychopath whisperer named Evelyn arrives at the police station to help detectives with the recent cranium cutting case. Evelyn thinks it’s the work of a serial killer. She is considered to be a great asset on the case, but Dexter is worried she has ulterior motives involving him. Evelyn asks him about the Bay Harbor Butcher. She says the way he chose his victims spoke of guidelines. Dexter is afraid she’ll start looking in his direction.

Deb calls Quinn and asks him to look into a guy named El Sapo (The Toad). El Sapo wants to buy the jewelry Andrew is trying to sell. Quinn looks up the name and discovers the store Briggs robbed belonged to a mob guy. Dexter realizes El Sapo is not an interested buyer but a hitman. Dexter tries to call Deb to warn her, but her mailbox is still full so he heads to the grungy hotel where she is staying. Jamie, the nanny, has the night off so Dexter brings Harrison along for the ride.

Once at the hotel, Dexter tries to warn Deb, but she refuses to leave even knowing the danger. Andrew walks outside and recognizes Dexter from the store. A scuffle ensues and Dexter stabs Andrew, killing him. Deb says Dexter is the one who is lost. She calls and reports the murder, playing it off like she was only investigating the case this entire time.

When Dexter returns to his car, Harrison is gone. Dexter quickly finds his son wandering around in the parking lot. Dexter’s hands are still covered in Andrew’s blood.

El Sapo is in the motel parking lot watching all of the events unfold.

Later, Evelyn finds Dexter sitting on LaGuerta’s park bench. She leaves a folder with him. Inside are pictures he drew as a child of people dying. Dexter confronts her, but she says he can’t kill her because it doesn’t follow Harry’s code. She knows about Dexter.