While his wife did the heavy lifting during childbirth, Channing Tatum revealed on Chelsea Lately that he was a crying mess during delivery. 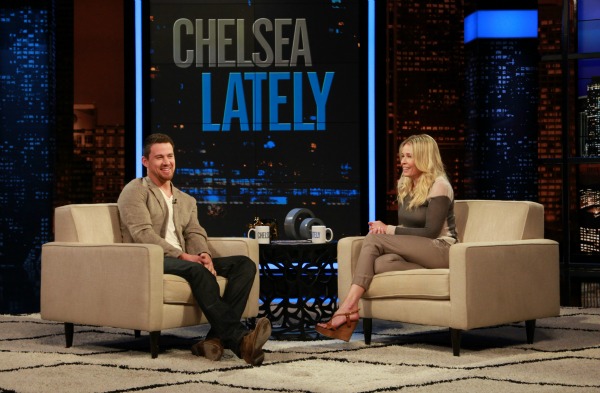 Ladies are going to swoon over Channing Tatum even more when they hear how he reacted to the birth of his first child. It’s sweet, it’s sensitive and it makes Jenna Dewan-Tatum the envy of every woman in America.

On Thursday night’s Chelsea Lately, the actor talked about the entire process of childbirth to host Chelsea Handler.

He shared, “There’s a real reason why God did not give [men] the ability to have babies, because we would not be able to do it. I don’t know how [women] do it. It’s a real thing. It’s like National Geographic animal-style for real. I don’t get it.”

Channing Tatum refuses to sell pictures of his baby >>

The emotions of the moment got to the White House Down star.

Tatum revealed, “I probably went to the bathroom four times and had a crying fit. Like, I’m just like, ‘I don’t know what to do!'”

He continued, “It’s like someone’s hurting, someone that you love and you can’t do anything about it. You physically cannot help. And I’m still not helping and the baby’s out. It doesn’t matter. You are useless.”

The protective husband really wanted to help out his wife, but the 33-year-old realized there isn’t much he could do but support Dewan-Tatum during the delivery.

Battle of the flicks: White House Down vs. The Heat >>

He said, “Men are useless but like, we are really useless during this. The baby’s gonna come out whether you’re there or not.”

The Magic Mike actor seems to be enjoying parenthood, though. He and his wife shared their daughter Everly’s first photo on Facebook for Father’s Day.

After his delivery-room crying fit, it looks like the family of three is settling in just fine.