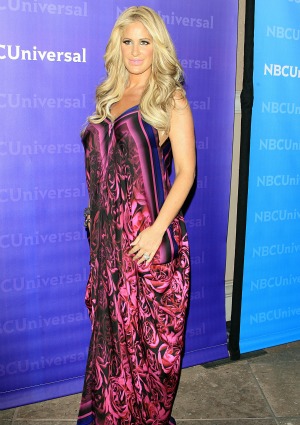 Kim Zolciak announced in early June that she was pregnant with baby number five. She’s always talked about enjoying parenthood, so it’s a little surprising to see the paparazzi photos of the pregnant mom smoking a cigarette.

The former Real Housewives of Atlanta star was caught on Thursday puffing away even though research has shown that cigarette smoking can be detrimental to the development of a growing fetus. TMZ has the photos on their website.

Why Jessica Simpson, other stars are having back-to-back babies >>

Zolciak is approximately four months pregnant and at the start of her second trimester, so the baby is developing at a rapid pace. Her baby bump is quite evident in the photos snapped by the photographer.

This is not the first time the Don’t Be Tardy… star has been caught smoking while pregnant. Kroy Biermann’s wife is a repeat offender. She smoked during the first trimester of her third pregnancy, but claimed that she didn’t know she was pregnant at the time.

The reality personality has yet to comment on the published photos, but it will be pretty hard to deny it this time around — she was caught red-handed.

Zolciak married the NFL star in November 2011. They are the parents of Brielle, 16, Ariana, 12, K.J., 2, and Kash, 9 months. Biermann just adopted the Bravo star’s two oldest daughters from previous relationships.