Olympic athlete Oscar Pistorius is trying to run his worries away as he gets back on the track while awaiting his next court date. 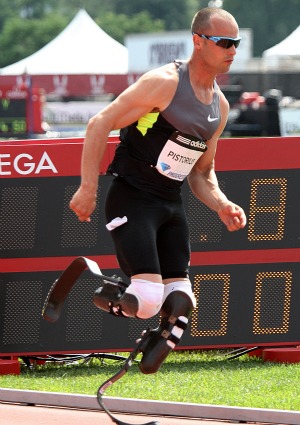 The Bladerunner is back on the track, but can he run away from his problems? Oscar Pistorius has resumed his training routine while he awaits trial for the murder of girlfriend Reeva Steenkamp on Valentine’s Day, but friends and family say it’s only to help lift him out of his depression.

Sports agent Peet van Zyl confirmed to the Associated Press that Pistorius — who runs on blade-like prosthetic legs — returned to light training and was overwhelmed with feeling as he prepared to run.

“I think it’s huge for him,” van Zyl said. “He was overcome with emotion when he put on his blades.”

The agent said there are no plans for the athlete to run competitively and that he only planned “light stuff” in training to give his life a sense of routine again.

“The actual word he used to me was bittersweet,” Van Zyl said of the session. “He can’t be happy because of what’s happened.”

The Pistorius family confirmed the activity, issuing a statement on the athlete’s website saying, “Oscar has decided to resume a low-key track routine. Oscar is not contemplating a formal return to athletics and his training is not aimed at preparing for competition.”

“His focus at this time remains entirely on the court case. His family, and those close to him, have encouraged him to spend a few hours a week on the track to assist him in finding the necessary mental and emotional equilibrium to process his trauma and prepare for the trial.”

Currently out on bail, Pistorius next heads to court on August 19 when he could be indicted for murder. If so, a trial date could be set for as soon as September or October.

If convicted, the 26-year-old faces life in prison.