Paula Deen’s sponsors are dropping like flies as the disgraced TV cook finds herself dropped by four more sponsors — but all is not lost. 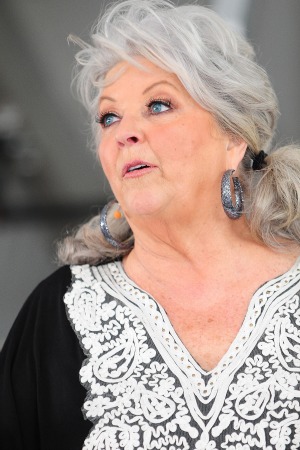 The empire of matronly Southern cook Paula Deen is quickly crumbling around her like the ruins of a Reconstruction Era plantation. Four more companies with whom Deen was partnered have jumped ship, but the TV cook still has one moneymaker: her cookbooks.

Deen, who admitted in a deposition for a sexual harassment lawsuit to using racial slurs, was dropped by Sears and her products will be “phased out” of the retailer’s stores nationwide.

“After careful consideration of all available information, we have made the decision to phase out all products tied to the brand,” a company spokesperson told E! News. “We will continue to evaluate the situation. Our members’ needs will be given first priority as we work to continue to provide quality cookware in our stores and online.”

QVC also dumped Deen, although they cushioned the blow by saying they were just taking a break.

“We too are troubled by what Paula has acknowledged saying,” QVC president Mike George said in an open letter on the company’s blog. “We’re also troubled by the allegations against her. We deeply believe, as you do, that everyone deserves to be treated with dignity and respect.”

“We have talked with Paula and her team extensively over the last several days, and together we have considered what is best for our customers, for Paula, and for QVC. For now, we have decided to take a pause. Paula won’t be appearing on any upcoming broadcasts and we will phase out her product assortment on our online sales channels over the next few months. We all think it’s important, at this moment, for Paula to concentrate on responding to the allegations against her and on her path forward.”

“Some of you may wonder whether this is a ‘forever’ decision,” George continued, “Whether we are simply ending our association with Paula. We don’t think that’s how relationships work. People deserve second chances. And we always strive to do the right thing.”

Less wordy with their explanation was Target, who, after saying they would be “monitoring the situation,” decided to passive-aggressively end their partnership. “Once the merchandise is sold out, we will not be replenishing inventory,” said Target spokeswoman Molly Snyder.

Last but not least, diabetes drug maker Novo Nordisk distanced themselves from Deen, stating, “Novo Nordisk and Paula Deen have mutually agreed to suspend our patient education activities for now, while she takes time to focus her attention where it is needed.”

Food Network chose to not renew Deen’s contract when it expires at the end of the month after she issued two apology videos that seemed to do more harm than good for her cause. Smithfield Foods and Walmart quickly followed suit.

But it’s not all bad news for Deen. Her cookbook sales have gone through the roof in the last week, with pre-orders for Paula Deen’s New Testament: 250 Recipes, All Lightened Up shooting it to the No. 1 spot in the Amazon bestsellers list, despite the fact that it won’t be released until October. Paula Deen’s Southern Cooking Bible is sitting at No. 2.

Martha Stewart “feels” for Paula Deen
VIDEO: Paula Deen breaks down over “horrible lies”
Paula Deen’s sons: Our mother is not a racist!