Matthew Morrison is getting hitched — but it’s another star who broke the news. 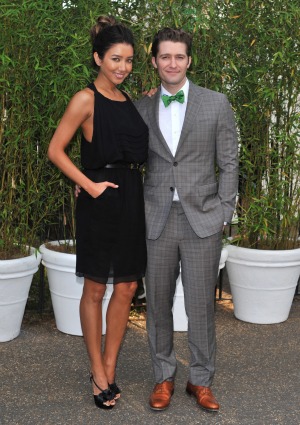 Matthew Morrison popped the question to girlfriend Renee Puente with a very royal-esque sapphire and diamond ring — and she said yes!

The Glee star met his bride-to-be at Elton John’s annual White Tie and Tiara Ball two years ago, so it was only fitting that the news broke at the illustrious party.

In fact, Elton John and husband David Furnish were so excited about the lovebirds’ new engagement that they spilled the beans to other guests themselves!

To make up for their loose lips, John and Coldplay’s Chris Martin serenaded the couple with a duet of “Your Song” — another royal similarity, as it was the same tune Prince William and Kate Middleton danced to at their private wedding reception.

Morrison, who is in Europe promoting his new album Where It All Began, recently told The Daily Mail he couldn’t wait to marry the dark-haired beauty.

“I hope so, then maybe working on kids,” he said. “Who knows? I’ve always wanted to have children, but when the holidays are here and I’m around kids more, I’m like, do I really want a kid?”

Did Matthew Morrison call his ex a dumb-dumb? >>

“It’s great to be able to enjoy them and then I’m like, okay, bye! Although when I’m 80 years old, I’m going to want kids and grandkids. That would be awesome.”

He also revealed that the glitz and glamour of Hollywood gets tiresome and he’d really rather cozy up at home with his love.

“In a business sense, it’s important to be seen at some of [the parties] and speak with people you could work with in the future. But I’d much rather be at home with Renee.”

“We love to cook, there’s something about preparing a meal where you get to enjoy your creations together.”

Catch up on all your favorite star couples — subscribe to the SheKnows Entertainment newsletter! >>