In this episode of Burn Notice, called “Brothers in Arms,” Michael gets closer than ever to discovering what Burke’s plan is, but not before a new player is put on the board. 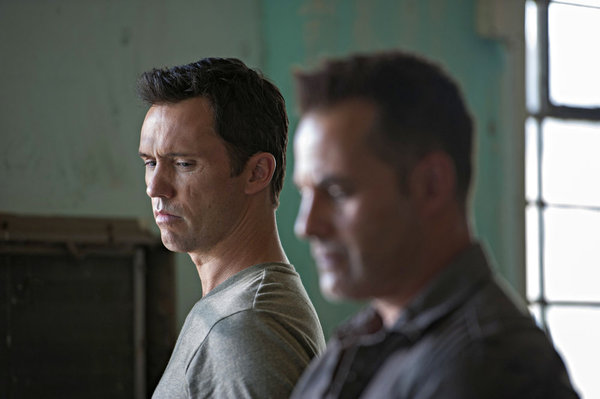 I hope that everyone can excuse my language for a second, but after watching this episode, I just have to say: This sh** just got real.

Burn Notice season 7 episode 3 recap: This thing is far from over >>

Within the first five minutes, I knew we were in for another jaw-dropping episode. Remember back in the day when Burn Notice was all about Michael (Jeffrey Donovan) running around Miami with his wise-cracking sidekicks as he showed us all the cute little secrets to being a spy? Yeah, that show has been replaced and this new show is, in a word, awesome. When I saw that little girl on Michael’s camera, I freaked out. I mean I knew he would never, ever shoot her, but it still made me sick to my stomach — for Serano, for the little girl if she happened to wake up and for Michael for having to do something that heinous. Then, as Burke (Adrian Pasdar) gave Serano that bullet while Michael still stood over his daughter, I knew what was going to happen next, but I won’t deny that I may have jumped a bit when I heard the gunshot over Michael’s headphones as he put the teddy bear on the bed.

Burn Notice 100th episode recap: Echoes in the past play in the present >>

And that was just the first five minutes.

After that, it was like being on Mr. Toad’s Wild Ride. Michael puts himself in further danger by volunteering to go to the Russians (and getting waterboarded for his troubles), while Fi (Gabrielle Anwar) and Maddie (Sharon Gless) work together to kidnap a poor spy named Ivan, and Sam (Bruce Campbell) and Jesse (Coby Bell) are left running backup for Michael and Burke. Through all the intense moments, I was shocked that this episode still made me laugh out loud a few times. Michael giving his captors some wisecracks in Russian was fantastic. I also loved how Jesse and Sam kept doing things to make them sort of the bumbling comedy relief, while they still did what needed to be done.

In the end, I never expected that Burke would sacrifice himself for Sonya (Alona Tal). Even when he brought in the Semtex in his laptop, I thought he was going to plant it somewhere — not blow himself to kingdom come with it. Who is Sonya? Well, I guess we’ll find out next week, but right now my money’s on her being his daughter. Though why would she be the key to everything, I have no clue.

The first five minutes of this episode. Need I really say more? 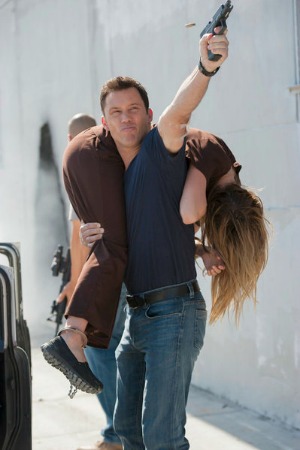 “To stop a monster, sometimes you have to pretend to be one.”

Michael apologizing to Fi for not changing and then saying that he was glad she had the life she wanted now.

“Don’t worry about me, it’s my first kidnapping.”

“OK, that looks sufficiently gross.” — I am so with Jesse on that. Brilliant way to hide a bug, though.

Really falling in love with that car Michael is driving. Yowza.

Jeffrey Donovan busting out his Russian again. I always love it when he gets the chance to do that.

Michael’s voice over talking about how, if the op went bad, his team would just listen to him die.

Ivan thinking that he was getting away, just before Maddie hit him with the car. Oops.

“Just ’cause I got nothing better doesn’t make your idea good.”

Sam and Jesse jumping onto the bus. Can we say “bada**?”

“Water? But not too much.” — Ha! I love Michael being a smart aleck in Russian.

Jesse clarifying what complaining was.

“Tell you what, next time we’ll wait for a bus with a giant pillow on it. How does that sound?”

Fi offering to put money into an account for Eva for Ivan.

The look on Michael’s face when he realized he just caused a Russian sub to enter U.S. waters. Oh boy.

Burke promising Sam that he wouldn’t leave Michael behind.

“She is all that matters.” — Yep, I have a feeling Sonya is totally related to Burke. Daughter? Sister?

Burke sacrificing himself for Sonya.

Ivan finding out that Fi and Maddie had decided to help him and his precious Eva to start over.

“Other than the fact that we probably have most of the Cuban military and a submarine full of Russian commandos looking for us, everything is super.”

The sounds on the phone telling me that Sonya was definitely awake.

Who do you think Sonya is? Were you surprised when Burke sacrificed himself for her?