Alec Baldwin is not happy that a reporter accused his wife of tweeting during James Gandolfini’s funeral. 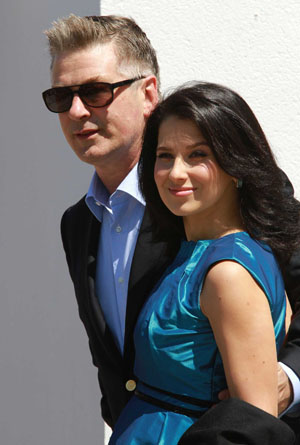 Word to the wise: Don’t mess with anyone in Alec Baldwin‘s life, unless you want to be the subject of one of his infamous Twitter meltdowns.

“Someone wrote that my wife was tweeting at a funeral. Hey. That’s not true. But I’m gonna tweet at your funeral,” Baldwin started early Thursday evening. The former 30 Rock star was referring to a U.K. Daily Mail article that accused his wife, Hilaria Baldwin, of tweeting during James Gandolfini‘s funeral on Thursday morning.

The curtain is closing on Alec Baldwin’s Broadway show >>

“The circle of life is unbelievable — birth, life, death… Please take care of yourselves as life is fragile. Rest in Peace Jimmy,” the pregnant yoga instructor tweeted around 10:17 a.m. EST.

Her tone changed a few minutes later when she allegedly tweeted an upbeat message.

“What did you do for your first wedding anniversary? What did you give your partner? Ours is coming up!” read a tweeted posted at 11:09 a.m EST.

She also apparently retweeted a “cute” US Weekly article about her recent baby shower for military wives, along with one of her smoothie recipes from Rachael Ray’s account.

“I’m sure you have some amazing recipes!” she added.

The problem? Hilaria denies tweeting anything during the service.

“I don’t know what hurts more: people randomly and maliciously writing lies about you, or the people who actually believe them,” she tweeted, adding that she’d never use her phone during a funeral service.

We’re inclined to believe her. Many celebrities employ publicity teams to manage some — or all — of their personal tweets. That’s likely what happened here.

Her only misstep? Not instructing her team to stop with the 140-character messages during the funeral. But, the damage is already done — and Baldwin is none too pleased about the accusations thrown at his very pregnant wife.

And “none too pleased” is putting it very lightly:

“I want all of my followers and beyond to straighten out this little b***h, George Stark.”

“My wife and I attend a funeral to pay our respects to an old friend, and some toxic Brit writes this f*****g trash.”

“I don’t have a publicist anymore. I fired them.”

“How much of this s**t are people supposed to take? With these f*****g blatant lies EVERY DAY.”

“My wife DID NOT use her phone, in any capacity, at our friends funeral. Now, f**k this twitter + good luck to all of you who know the truth.”

Is Alec Baldwin overreacting, or right to protect his pregnant wife against tabloid rumors? Sound off below!