Kris Jenner is launching her own talk show, but decided to open up about her new granddaughter, and her daughter’s boyfriend. 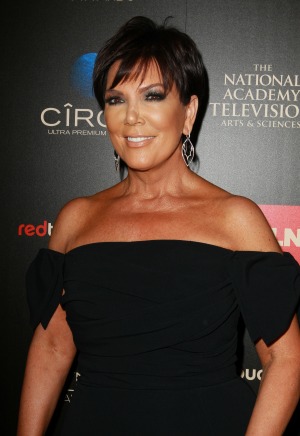 Kris Jenner is launching her talk own show in July, and stopped by Access Hollywood to talk about it. But the topic of the day of course ended up being her daughter Kim Kardashian’s new baby.

The grandma of baby North didn’t seem too surprised at the out-of-ordinary name chosen by Kardashian and boyfriend Kanye West.

“I was kind of expecting something a little different, because I know the two of them and I knew they would pick something unique,” Jenner explained. “She explained to me, ‘North means the highest power,’ so, they said north is their highest point together. I think they chose [the name] together.”

Jenner is not only happy about her new granddaughter, but seems genuinely happy for her daughter’s relationship.

“There was just a really nice friendship and a bond there for sure,” she said. “He’s amazing, he’s a really cool guy. He’s a softie.”

And Jenner seems especially happy for the relationship because she feels like she really knows the guy who may one day be her son-in-law.

“He’s just a big teddy bear,” she told Access Hollywood. “We get along really good, but we always have. I’ve known him for a really long time. He’s been a really close friend of the family, 10 years maybe. I would talk to him on the phone, lots over the years.”

In fact, not only does she consider West a close friend, but she is a fan as well. Jenner admitted that her love of his music led to an embarrassing moment with him recently.

“My ringtone is ‘Gold Digger.’ That’s my secret of the day!” she said. “The other day the phone rang and he was standing there, and it was like, ‘a Gold Digger!’ I’m just like, ‘This is so embarrassing!’ It was funny.”

Jenner admitted she doesn’t know how long the family will continue to do Keeping Up with the Kardashians, but she is looking forward to her new show, Kris.

“It’s fashion and fitness and beauty and cooking and food and just all sorts of stuff, along with a lot of pop culture,” she said. “And I’m going to have a different co-host every single day. It’s more lifestyle-related than just pure, celebrity talk show. I think it’s going to be fun to show people the things that I’m interested in.”