With new characters added to each book, The Hunger Games is still casting characters. For the final book in the series, they are looking for their rebel president. Could Julianne Moore be the answer? 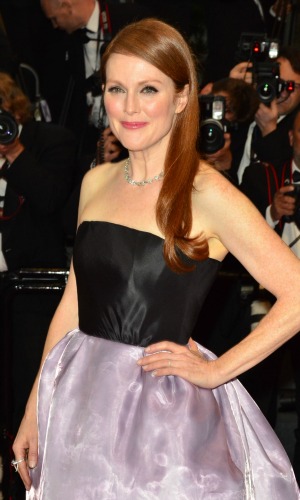 The Hunger Games trilogy has some big stars in its ranks (and has even created a few big stars), but it looks like it may have one more soon. Actress Julianne Moore is reportedly in talks to join the cast for the final two films.

The Hunger Games: Mockingjay, the final book of Suzanne Collins’ trilogy, will be split into two films. Because of the storyline, many characters don’t make an appearance until after the second book, Catching Fire. If the talk is true, Moore would be playing one of those characters: the president of District 13, Alma Coin.

President Coin is the head of the rebel forces fighting against the Capitol of Panem, and is often in conflict with main character Katniss Everdeen in the story.

Moore is in “early talks” for the character, according to The Hollywood Reporter. If she signs on, she would be joining an all-star cast that already includes Jennifer Lawrence, Liam Hemsworth, Josh Hutcherson, Elizabeth Banks, Woody Harrelson, Jena Malone and Philip Seymour Hoffman.

To direct, Mockingjay has also signed on Francis Lawrence, the director The Hunger Games: Catching Fire.

Moore is a busy lady lately. She has five films coming out in 2013 and 2014, including a remake of Carrie, Seventh Son with Jeff Bridges and Don Jon, a film written and directed by Joseph Gordon-Levitt. She is also fresh off an Emmy Awards win for her role as vice presidential nominee Sarah Palin in HBO’s Game Change.

Other names mentioned as possibilities (or at least fan favorites) for the part of President Coin include Meryl Streep, Jane Lynch and Sigourney Weaver, according to the Huffington Post.