Zach Braff will make his Broadway debut next spring in Woody Allen’s musical adaptation of his film Bullets Over Broadway. 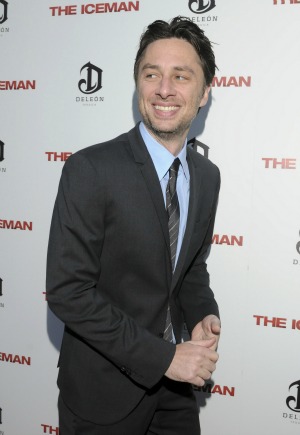 Scrubs star Zach Braff is headed to Broadway. The actor will be making his debut on the Great White Way in the musical adaptation of Woody Allen‘s film Bullets Over Broadway.

The news was announced on Thursday that Braff would take the stage in the crime caper as a struggling playwright who must cast a mobster’s girlfriend in his latest work. John Cusack played the role on-screen in the 1994 flick.

Braff is excited by his new project.

He told the Associated Press, “It’s thrilling. I keep waking up expecting it to be a dream.”

In fact, doing a show on Broadway was always on his career radar.

The Garden State director added, “If you would have asked me a couple months ago, ‘What are your dreams as an actor?’ I would have said, ‘I’d love to do a Broadway musical one day and I’d love to work with Woody Allen again.’ When I got the call from Woody and Susan Stroman, my head sort of exploded.”

Billy Crystal is headed back to Broadway >>

The only person more excited by the news is Braff’s dad, who dabbled in community theater as a hobby.

Braff shared, “I said to Woody, ‘He’ll be there more than you.’ I said, ‘I might need a cot for my father between the matinees and the evening show.'”

The 38-year-old actor is already working with a vocal coach in preparation for the 2014 show, but he’s no stranger to musical theater. Braff went to Stagedoor Manor, a musical theater camp in the Catskill Mountains of New York, as a kid, and he was a part of many musical segments during his Scrubs run.

Braff is currently working on his Kickstarter-funded film, Wish I Was Here.