Heidi Klum wants Seal out of her life for good: She’s removing his name from a tattoo on her arm. 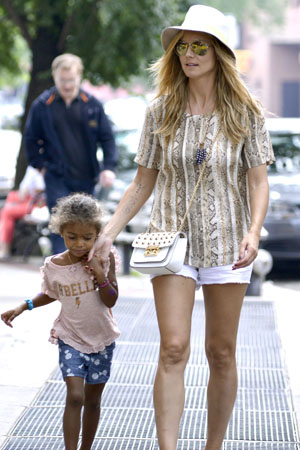 Sorry, Heidi Klum and Seal fans: It seems like the pair is over for good, judging from a fading tattoo on the America’s Got Talent judge’s forearm. The German model “is in the process of getting her tattoo removed,” a source told People.

Why is that significant? It’s an abstract design that incorporated her singer ex-husband’s name.

“It was our fourth wedding, and we wanted to have our names tattooed together,” she said in 2008. “So it’s my husband’s name and our three children — their initials, in the [three] stars.”

Klum broke the No. 1 rule of tattooing: Never, ever, ever get someone’s name tattooed on you — even if he’s your spouse. It’s like the instant kiss of death for relationships.

Not that we expected Klum and Seal to ever split. The pair — who finalized their divorce in April 2012 — seemed like the perfect couple. They even renewed their vows each year to reaffirm their commitment.

“I wanted to keep the memory of [mine and Seal’s] wedding alive every year,” she told Marie Claire earlier this year of their seven-year marriage. “That’s why I thought it would be fun to get married over and over.”

It didn’t work. Now, she’s in the midst of the expensive — and painful — laser treatments.

“She’s been through a few treatments,” a source added to People. “The stars with her children’s initials will stay intact.”

No word on what Seal plans to do with his tattoo, but we do know that Klum won’t get another tattoo — she won’t even walk down the aisle again.

“I don’t think [I’ll get married again], no, no,” the model, currently dating bodyguard Martin Kirsten, added to Marie Claire. “Now I don’t think that’s important. I’m not angry about anything, but I don’t think I will. Maybe if I’m with someone for 15 or 20 years, and we do it in our old age as a fun thing to do… But I don’t have the urgency anymore.”

And hopefully, if she does remarry, she’ll just celebrate with a monogrammed necklace instead of some new ink.

Did you get a tattoo of your significant other’s name on your body? Did it work out, or do you regret it? Sound off!