From whole swine heads to a foodie wedding, the home chefs had their work cut out for them in Week 6. MasterChef judge Graham Elliot fills us in on the dish that made him squeal, the most beautiful soup we’ve ever seen and why the honeymoon’s over for Jonny B. 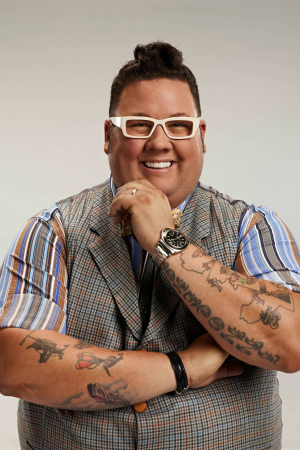 SheKnows: First things first, that pig’s head — blech! I half expected someone to go all Lord of the Flies, stick one on a stake, and start chanting.

Graham Elliot: Yeah, I think that or, like, just take off an ear to cook and wear the thing like a helmet the rest of the show. (laughs)

SK: For real, though, the whole thing made me queasy. Is there anything you’ve come across in all your culinary years that actually made you gag?

GE: No! I think ever since being a kid, I’ve always loved really weird stuff like that, you know? The weirder, the cooler. Obviously for people at home, it’s a different experience. I had a lot of people comment that they were very surprised to see a whole animal’s face sitting on a counter on a TV show. But it’s good — it’s nice to force people to see what they eat every day.

SK: That’s true! Which leads me to poor Bri. As a vegetarian, I am always curious if vegetarian chefs have to taste meat dishes when they make them. Does Bri?

GE: No, she usually does not, I don’t think. She tries some of the fish, but she never tries any of the red animal meat.

SK: Which of the top three mystery box dishes — Lynn’s, Jessie’s or Jonny’s — really made you, as you said, “squeal with excitement?”

GE: I think Lynn’s! I really liked Lynn’s dish. I think that he did something really special… and his food’s always so beautiful.

SK: I am in awe of Christine Ha…

SK: Ha ha, gotcha! Do you think the home chefs could have actually pulled off cooking blindfolded?

GE: It’s super-hard. I tried it last season just to see what it would be like and, you know, a good relationship between a chef and his ingredients or tools — like a knife and a pan — you start to understand it’s like a dance. You reach behind you to grab this, then you move down to put it in the oven, and then you go over here to do this. But it’s making sure all of your things are always in the exact same place, especially when it comes to plating. You have to remember where you put something on the plate, and how you are going to sauce it. It’s incredibly hard.

SK: Lynn stuck Krissi with cooking catfish and, although she claimed she was super-familiar with it, she cooked it with the skin on. Do you think she was exaggerating?

GE: I wouldn’t say she was lying or something — I’m sure she’s had it before — but… I’ve never had catfish fried with the skin on like that. Catfish needs a lot of work. It does taste like the bottom of an aquarium a lot, and this was just a really heavy, big truck-stop-diner kind of catfish dish.

SK: Were y’all shocked when she mouthed off to Joe?

GE: I mean, nothing with Krissi shocks me, ever. But I think of any person you’re going to mouth off to, Joe would probably be the last one.

SK: On to the challenge… how did you get Anya and Aaron to agree to let the home chefs cater their wedding?

GE: A lot of begging! (laughs) They were open to it and thought it would be fun and memorable and, of course, it was. I think it was a really great experience and really showed the contestants how, whether you’re going to be a caterer or a chef or a cook or anything doing this professionally, there is so much that rides on it. There’s nothing greater than someone’s most important day and making sure that the food goes out perfectly and that they love it.

SK: Seriously, how hard was it to work around Anya’s mile-long list of dislikes?

GE: Yeah, that was crazy… you can’t make that kind of stuff up. All I can say is I think everyone tried to work around that and tried to bite their lip. 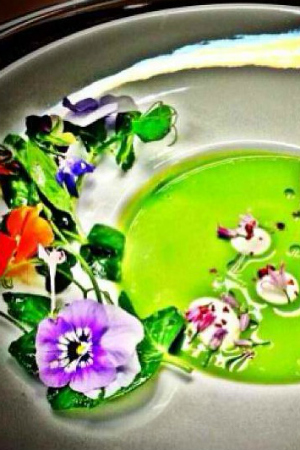 SK: The spring pea soup appetizer you made was so beautiful I wanted to plunge my head in it. Is it one of your favorite recipes?

GE: All of my dishes I try to say imagine you are walking in the woods and stumble upon it — it’s very natural and beautiful looking and evocative of the season and what’s going on. So that’s kind of how I plate my food, and we were very, very happy with the outcome.

SK: Krissi and Bri were left jilted at the altar. Do you think team captains James and Natasha picked the right people to sit out?

GE: I don’t know why anyone would ever sit Bri out — she’s really, really strong and very capable in the kitchen. In the beginning Jordan was questioning Natasha and that went back and forth, but Natasha absolutely stood up, stuck to what she was doing, listened and rearranged things. Bethy was just an absolute trooper, getting everything done that was asked of her, and then the rock star was Eddie. He was cooking off every piece of fish and overseeing everything. That team really had it together. But the blue team was a different story.

SK: Natasha plays the villain, but she seemed really supportive of her team during the challenge. More to her than meets the eye?

GE: I think there is. She reminds me of Becky Reams from last year. She is very, very focused and can really make some great food at the end of the day. On one hand, you can kind of be cocky or whatever the word is, but she does have the skill to back it up.

SK: I’m a fan of Lynn’s, but the sweat rag dish wiping almost did me in. Was Gordon on the verge of kicking him out of the kitchen?

GE: Yeah, I think that watching that happen over and over… Gordon gets in the kitchen and, when he starts buttoning up the chef coat, it’s like a completely different person. It’s like when Superman changes from Clark Kent! You see him just absolutely get in the zone. Nothing matters except what’s going out of the kitchen, so everybody needs to be on their “A” game.

SK: So comes the time when I must ask: Why did Jonny end up in the culinary cagefight with Lynn?

GE: There’s so much going on at that time, and there are a lot of things you don’t see. Like Jessie was amazing at being able to replicate exactly what the dish needed to look like. Luca was the one guy asking all the questions, like, “How come we don’t have that ready? Why does this sauce look like it’s separating?” You know, really trying to control the ship. And James, no matter how much Gordon beat up on him or Joe was yelling at him or I was trying to correct things with him, never once broke down or said this is too much or got flustered. He was like, “All right, let’s do it. C’mon guys!” He was the constant cheerleader keeping the team pumped up. Jonny, who is a great cook and a lovable guy, was kind of just hiding in the back of the kitchen bringing hot plates back and forth. He really wasn’t part of the team.

SK: Had he not lost his cool and crushed his macaroons, would he have beaten Lynn based purely on taste?

GE: Man… I think he probably could’ve. They were really good! I think that what somebody said that was funny online was because Jonny was a carpenter he should’ve built a bigger box. (laughs)